Ramgati Upazila (lakshmipur district) area 291.82 sq km, located in between 22°52' and 22°90' north latitudes and in between 90°47' and 91°01' east longitudes. It is bounded by kamalnagar on the north, hatiya upazila and meghna river on the south, subarnachar upazila on the east, tazumuddin and daulatkhan upazilas and Meghna river on the west.

Administration Ramgati Thana was formed in 1862 and it was turned into an upazila in 1983. 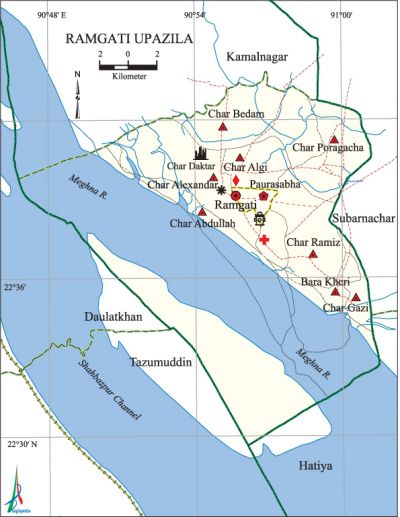 History of the War of Liberation During the war of liberation in 1971 a battle was fought between the freedom fighters and the Pak army at the turn of the Zamindar Hat in which 17 Pak soldiers including a number of razakars were killed.

Natural disaster More than one lakh people' and several lakhs livestock were victims of the devastating tornado and tidal bore of 11 November 1970; it also caused heavy damages to property of the upazila.