Rupsa Upazila (khulna district) area 120.15 sq km, located in between 22°43' and 22°52' north latitudes and in between 89°33' and 89°41' east longitudes. It is bounded by terokhada upazila on the north, fakirhat and batiaghata upazilas on the south, mollahat and Fakirhat upazilas on the east, kotwali (Khulna) and khalishpur thanas on the west.

Administration Rupsa upazila was formed in 1983. 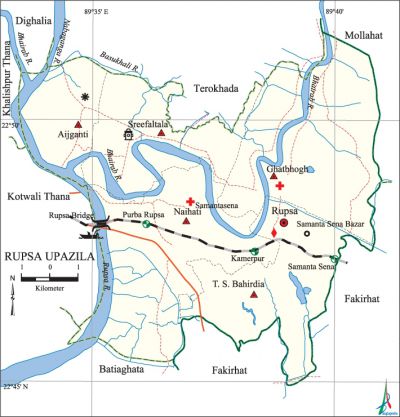 History of the War of Liberation The Pak army conducted mass killing and heavy plundering in the upazila in 1971; they also set many houses on fire. On 10 November, the Indian Air Force mistakenly launched an attack and destroyed two war ships named 'Padma' and 'Palash' belonging to the freedom fighters. The Artificer of Palash, Birsrestha ruhul Mohammad amin, jumped into the river with burn injury but was killed by the razakars while on way to river bank.

Natural disasters The floods and cyclones of 1988 and 1998 caused heavy damages to fishery, livestock, and crops of the upazila.