Sarankhola Upazila (bagerhat district) area 756.61 sq km, located in between 22°13' and 22°24' north latitudes and in between 89°46' and 89°54' east longitudes. It bounded by morrelganj upazila on the north, the bay of bengal on the south, mathbaria and patharghata upazilas on the east, mongla upazila on the west.

Administration Sarankhola Thana, now an upazila, was formed in 1907. A major part of the upazila belongs to the sundarbans. 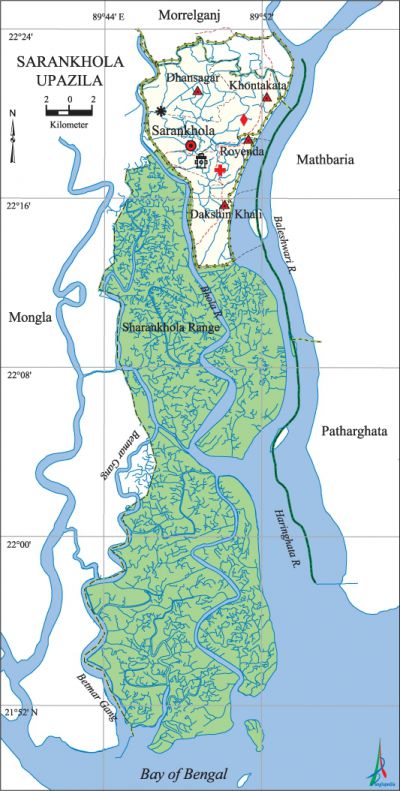 Historical events In 1965 embankments through the rivers were constructed to save the region from extreme salinity; besides, the mouth of all the canals were blocked for the same purpose. However, as a result water loggings became evident in the region resulting into damages to crops. Having failed to get any help from the government the local peasants revolted and on 10 March 1969 they dismantled the embankments on Bayenda, Tafalbari, Khontakata and Kumarkhali canals all on a sudden. During the war of liberation in 1971 the Pak army killed about more than one hundred people by brush fire at Tarabaka canal. Direct encounters between the freedom fighters and the Pak army were held in different places including at Royenda Bazar. On 21 October, a fierce battle was held between the freedom fighters and the Pak army at Bogi.

Natural resources' Natural gas and mineral oil explorations have been going on in the Sundarbans area of the upazila.

Natural disasters Many people were victims of the Sidr of 15 November 2007; it also caused heavy damages to settlements, livestock, crops and other properties of the upazila.