Sirajuddaula nawab of Bengal. After the battle of palashi (23 June 1757) in which Sirajuddaula was defeated and subsequently murdered, the British became the virtual masters of Bengal, reducing the later nawabs to mere puppets in their hands. Mirza Muhammad Sirajuddaula was the grandson of Nawab alivardi khan and son of amina begum and zainuddin ahmad khan. He was born in 1733 and soon after his birth Alivardi Khan was appointed as the deputy governor of Bihar. So Sirajuddaula was regarded as a 'fortune child' in the family and his grandfather had special affection and favour for him. It is stated that Alivardi had given his heart to Sirajuddaula from the day of his birth and 'never kept him apart from himself'. 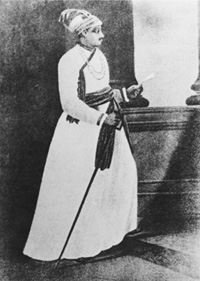 The old nawab had Siraj educated in his house. According to Muzaffarnamah of Karam Ali, Alivardi Khan tried to train him in the art of governance and other qualities that go with a crown prince. His general education was of formal type and perhaps not well calculated. Owing to ungrudging affection of the old nawab and flattery of his sycophant retinue he might have committed some excesses in his early years which Alivardi ignored.

It may, however, be noted that Sirajuddaula was given the charge of the nawab’s fleet at Dhaka while his younger brother Ikramuddaula commanded the army. Alivardi took young Siraj with him in his military campaigns against the Marathas in 1746. Alivardi Khan celebrated Sirajuddaula’s marriage with great pomp and grandeur. In May 1752, the nawab declared Sirajuddaula as his successor. On this occasion the European trading companies in Bengal also greeted him. During the closing years of his reign, premature death of some family members shattered Alivardi both mentally and physically and the old nawab died on 10 April 1756 at the age of eighty.

Immediately before his death the nawab advised Siraj to strive for the suppression of the enemies (of the province) and devote himself to secure the well-being of the subjects by removing all evils and disorders. He implored Siraj to nurture the goodwill of the people and follow his (Alivardi's) footsteps. Luke Scrafton relates that Sirajuddaula swore on the Quran at the deathbed of his grandfather that he would not touch any intoxicating liquor in future and that he kept the promise ever after. Siraj ruled for little over one year (April 1756 to June 1757) and the Masnad of Bengal was full of thorns for him. During his short-lived administration the young nawab faced enemies from within the family as well as from outside.

Sirajuddaula's nomination to the nawabship caused jealousy and enmity of ghaseti begum (eldest sister of Siraj's mother), Raja rajballabh, mir jafar ali khan and shawkat jang (Siraj's cousin). Ghaseti Begam possessed huge wealth, which was the source of her influence and strength. Apprehending serious opposition from her, Sirajuddaula seized her wealth from Motijheel Palace and placed her in confinement. The nawab also made certain changes in high government positions giving them to his own favourites. Mir Mardan was appointed Bakshi (Paymaster of the army) in place of Mir Jafar. Mohanlal was elevated to the post of peshkar of his Diwan Khana and he exercised great influence in the administration. Eventually Siraj suppressed Shaukat Jang, governor of Purnia, who was killed in a clash.

The accession of Sirajuddaula threatened the position of the dominant section of the ruling group in murshidabad, which was engaged in accumulation of wealth during the time of the earlier nawabs. With his assuming the reins of government, this group apprehended that he would be a danger to their continuous enjoyment of the sources of accumulation of wealth, as he was trying to raise another group to counterpoise the old one which usurped the power of the nawab to a great extent. Sirajuddaula's accession was a threat to the British also because he made it absolutely clear that unlike the previous nawabs he would not put up with the abuse of dastaks by the British and their illegal private trade. The threat came at a crucial time when the private trade of the Company's servants was facing a severe crisis.

Sirajuddaula had genuine grievances against the English east india company. First of all he suspected the company's design against his succession and expressed his annoyance to the British in no uncertain terms. His charges against the company were, first, that they strengthened the fortification around the fort william without his approval; second, that they grossly abused the trade privileges granted to them by the Mughal rulers by which the government incurred heavy loss of customs duties; and third, that they gave shelter to his officers like Krisnadas, son of Raja Rajballabh who appropriated government funds. The nawab also informed them of his intention to forgive them if they removed his complaints and agreed to trade upon the same terms and conditions as they did in the time of murshid quli khan. But the company practically showed no respect to the nawab's demands. On the other hand, governor roger drake of the Calcutta Council insulted Naraigan Singh, nawab's special envoy to Fort William.

These events enraged the nawab and to retaliate he first captured the kasimbazar factory and then attacked calcutta and drove the English out. This attack led to the so-called black hole incident. Following the nawab's action at Calcutta and arrival of reinforcement from Madras the alinagar treaty was signed between him and the English by which the nawab agreed to compensate the English their losses at Calcutta. But the English now became more arrogant. In fact reestablishment of the company's settlements in Bengal, after it's defeat at Calcutta, was possible only in two ways either to approach the nawab to forgive the company or to avenge the defeat by force. The English chose to avenge and in the garb of the peace treaty actual preparation for war began.

The English now turned to vigorous political and secret activities to destroy the French influence and to replace Sirajuddaula by a person entirely friendly to them. To this end the company successfully made a conspiracy against the nawab and enlisted the support of Mir Jafar, the jagat sheth and other disaffected courtiers. When everything was finalised the company's forces under robert clive and charles watson moved towards Murshidabad for a show down. The nawab met Clive at Palashi on 23 June 1757. The nawab was defeated in the battle that ensued and fled from the battlefield. On his way to Patna he was caught by a partisan of Mir Jafar and killed by an Iranian guard at the instance of Miran (son of Mir Jafar) on the night preceding 3 July 1757. In the mean time the company installed Mir Jafar as the new nawab of Bengal. Thus the English won the victory at Palashi not merely because of the strength of their forces but because of the strength of the conspiracy and the treason within Sirajuddaula's camp. The defeat of the nawab marked the beginning of the English ascendancy in Bengal and gradually the entire subcontinent surrendered its destiny to the East India Company.

Sirajuddaula was a victim of a conspiracy, engineered and encouraged by the British who roped in the disgruntled elements of the darbar in their 'project' of a coup. There is no denying that there was a simmering discontent in the nawab's court. But resentment against or dissatisfaction with the nawab might have created the necessary but not the sufficient condition for the hatching or the success of a conspiracy. The Palashi conspiracy took the final shape only under the aegis of the British and without their active involvement, it would not have matured enough to bring about the downfall of the nawab. Thus, Sirajuddaula had to go both for the benefit of the British and the ruling clique at Murshidabad. And hence the Palashi revolution in which Sirajuddaula was deposed and Mir Jafar installed.

It may be true that as a nawab, he was a little arrogant and perhaps also short-tempered. In other words, he had his limitations. His main shortcomings were his lack of firm resolution, his vacillation and above all his bewilderment when faced with a critical situation. But one has to remember that he was still a young man in his early twenties, not yet fully mature and quite a little 'intoxicated' with his power and position. His greatest mistake was that, in his inexperience, he tried to deal with all his opponents at the same time, without having recourse to necessary precautions that they could not combine against him. His failure to do so and his irresolution till the last moment brought about his downfall.

Sirajuddaula's limitations and his public and private character should be judged considering the environment he worked in and the cause he fought for and gave his life. A marked change in his character was noticeable after he had become the nawab. Alivardi's last advice might have acted as a great influencing factor on him. The verdict of history is that whatever might have been his fault, Sirajuddaula neither betrayed his master nor sold his country. 'The name of Sirajuddaula stands higher in the scale of honour than does the name of Clive. He was the only one of the principal actors who did not attempt to deceive'. [Sushil Chaudhury and KM Mohsin]