Snake elongated, cylindrical, legless vertebrates belonging to the order Serpentes under the class Reptilia. Snake's body is covered by scales and have no shoulder girdle and limbs. There are only vestiges of hip girdle and rudimentary hind limbs in certain species of python and Boa. Snakes are well-adapted to living underground, on land, in the trees, and in water. All snakes but the primitive blind snakes can swim. Golden Flying Snake (kalnagini sap), Chrysopelea ornata can glide from higher branches to the lower ones. 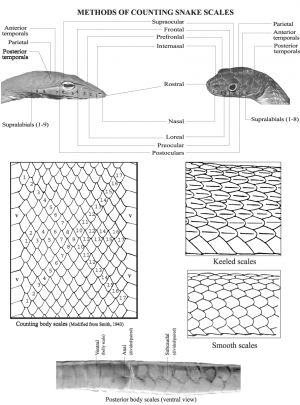 Snake scales are arranged in an overlapping fashion with their free edges pointing backwards like the tiles on a roof. Snakes slough off their skins in one piece several times a year. They have the highest number of vertebrae numbering from 100 to 400. Snakes do not have an external ear opening and hence they fail to receive air-borne sounds perfectly. However, their inner ears are equipped to receive vibrations from the ground or other substratum on which they remain through the lower jaw and the quadrate bone. Snakes have no eyelids. Elastic ligaments join two halves of their jawbones so that each half can be operated independent of the other when swallowing a prey.

Snakes are poikilothermous because both oxygen-rich blood and that lacking in oxygen get partially mixed up in the 3-chambered heart. Thus arteries carry mixed blood thereby supplying less energy to maintain a constant body temperature. The tongue tip is forked. This can be flicked in and out through a special opening of the jaw even when the mouth remains shut. On either sides of the upper jaw there is a Jacobson's Organ. When the tongue is drawn inside the mouth the tips automatically touch these organs that in turn receive chemical signal from them. It is very important for a snake to get all the information from the air and soil through the flicking of the tongue and the use of Jacobson's Organ. This supplements the hearing inability and poor eyesight. 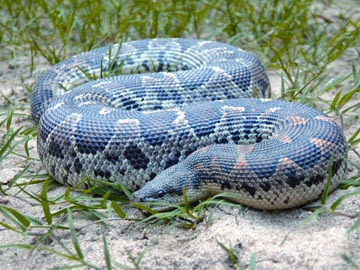 There are many unspecialized but backwardly directed teeth in each jaw of a snake. Only one or two pairs of these might be modified as poison fangs or well developed to hook fast moving prey. Both the jaws and body of snakes are exceptionally elastic. Snakes eat only live animals. However, Indian Egg-eater Elachistodon westermanni eats eggs. Depending upon their body size the land snakes eat toads and frogs, lizards and skinks, other snakes, small birds, rodents, hares, other small mammals, and fishes. Snakes swallow its prey whole. Common mode of killing a prey is coiling it followed by strangulation. Poisonous snakes might use venom to paralyze the prey. Snakes have an efficient digestive system that allows digestion of all parts of the prey. However, the egg-eater regurgitates the eggshells before swallowing the liquid egg-contents. Snakes rarely drink water. Most male snakes are provided with a pair of hemipenis and only one of it is used during copulation. Snakes live alone but the cobras live in pairs. Majority of the snakes lay eggs except for Vine or Whip Snake (lao doga/sutanali sap), Ahaetulla nasutus, several freshwater and estuarine snakes, sea snakes and vipers, which produce live babies either through ovo-viviparous or viviparous process.

There are about 90 species of snakes in Bangladesh, although over a dozen of these have not been reported during the last few decades. The common snakes of the country are Checkered Keelback (dhoda sap), Xenochsropis piscator; Striped Keelback (dora sap), Amphiesma stolata; Yellow-speckled Wolf Snake (ghorginni sap), Lycodon jara; Black-barred Kukri Snake (kukri sap), Oligodon cinereus; Olive Keelback (metey sap), Atretium schistosum; Copperhead (dudhraj sap), Elaphe radiata; Eastern Cat Snake (phanimonasa); Smooth Water Snake (paina/pani sap), Enhydris enhydris; rat snake (dhaman); Python (ajagar); cobra (gokhra) and sea snakes. Most snakes are non-poisonous and harmless to human being. Less than half a dozen land snakes are highly poisonous but they can be avoided without much trouble. By and large, snakes eat a huge quantity of live animals annually that are usually considered as pest on crops or as dangerous to human life. Tanned snake skins have very high market value while many live snakes are exported to Far Eastern countries as food. Several species of snakes are even worshipped by certain ethnic groups.

Non-poisonous snake Snakes without any poison fang, venom apparatus, or poison glands. More than three fourth of Bangladesh's 90 species of snakes fall under this category. All snakes under family Typhlopidae, Boidae, and Acrochoridae are non-poisonous. 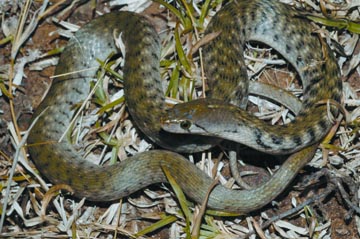 Most non-poisonous snakes have efficient, backwardly directed teeth for holding the prey firmly and then killing them by constricting. Some keep the grip over the prey up to the time it is completely immobile. Others start swallowing prey when it is alive. Their jaws literally walk over the prey. When the left upper and lower jaws keep a firm grip over the prey the right lower and upper jaws are pushed forward and getting a grip little ahead of the left.

Shamukh-khor sap is an uncommon species, found in the forests of the chittagong hill tracts. Its jaws, teeth and throat scales have become specially adapted for drawing out the soft parts of the snails. Several non-poisonous species are beneficial for the biological control of rats and mice. These are the species that live close to human habitations, eg dadash, dudhraj, golbahar, balu boda and gharginni. Skins of all these snakes are commercially very valuable. Ladies garments, purse, moneybags, handbags, handicraft items, curios, shoes, etc are made out of ajagar, golbahar, dadash, dhoda, dora and dudhraj sap. Most snake meat is white and literally contains very little harmful cholesterol and delicious in taste. East Asian people and the hill dwelling ethnic groups of Bangladesh love snake-meat. Non-poisonous snakes are a big attraction in zoo, terrarium, and serpentarium.

Poisonous snake Species of snakes with some kinds of poison or venom glands and poison fangs. Also they must have the mechanism to pour or push the poison from the venom gland through the fangs into the body of a prey or a victim. When administered the venom might make the victim temporarily immobilized, cause serious physical disorders or even kill the victim. Cobras and Kraits belonging to family Elapidae, and the sea snakes of the family Hydrophidae, and all the vipers and Pit Vipers of the family Viperidae are the true poisonous snakes. Few species belonging to the largest family Colubridae are also considered as poisonous. 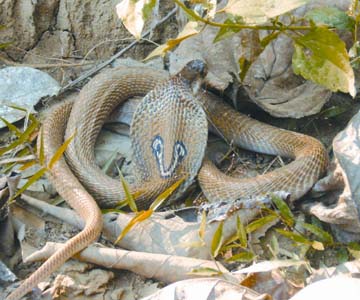 The poisonous colubrid snakes come under opistoglyphs or rear-fanged, also known as back-fanged group, the elapids and hydrophids under fixed front-fanged or proteroglyphs group and the viperids are under solenoglyphs or front-fanged group whose members can keep the fangs folded against the roof of the mouth. Poisonous colubrids are generally considered as mildly toxic or mildly poisonous snakes.

Poison glands of all snakes are nothing but modified salivary glands of the upper jaws that not only secrete mucous and certain digestive enzymes but also some proteins that are either mildly or highly toxic to the victims.

The poisonous colubrids have a pair of Duvernoy's or parotid glands incorporated into the superior labial or upper labial glands that produce mucous cells. The Duvernoy's gland is located behind the latter and produces venom or protein-secreting cells. The last 1-3 teeth of each side of the upper jaw of these snakes are modified and enlarged as fangs. Each fang has a very simple drain-like groove on the front or side that delivers the poison from the gland to the victim's body. The fangs are directly connected to the Duvernoy's gland. The bites of colubrid poisonous snakes are usually not fatal to human beings. However, if such a snake can chew the fingers or skin of a human being for couple of times the amount of venom that will be poured in the process might be fatal. Example of such snakes in Bangladesh are sutanali sap Ahaetula species; Phanimanosha, Boiga species; Dog-faced Water Snake (jol boda), Cerberus rhynchops; kalnagini Chrysopelea ornata; pani sap, Enhydris species; White-bellied Mangrove Snake (sundari sap), Fordonia leucobalia; Glossy Marsh Snake Gerardia prevostiana; and Red-necked Keelback (lal dora sap), Rhabdophis subminiata. 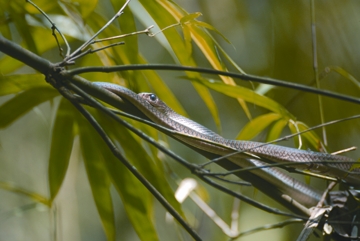 All elapid and hydrophid snakes have a pair of fixed frontal poison fangs in front of the upper jaw. They have a proper and functional poison gland that is located between the eye and the back of the upper jaw. The poison fang has a venom delivery canal formed by the joining up of the two opposite edges of a groove. Towards the end of the fang there is an orifice through which the venom is discharged. Elapid venom is basically neurotoxic and the victims get killed as a result of failure of the respiratory system or cardiac arrest. It stops the transmission of stimuli from nerves to muscles resulting in paralysis. Neurotoxins stop the activities of the synapse that maintains the contact between the nerves and the muscles. gokhra, Naja species, keutey and shakini sap, Bungarus species, and rajgokhra, Ophiophagus hannah are common elapids, and the sea snakes like Hydrophis species, Lapemis species, Laticauda species, Microcephalophis species and Pelamis species are common hydrophids of Bangladesh. Of these gokhra and keutey live close to human habitations and can be considered as potentially dangerous to human life.

The viperids have either one or two pairs of frontal poison fangs that are kept folded when not in use. Also their poison fangs are canalized that work like hypodermic needles. Their venom glands are larger than those of the ealpids and hydrophids. Viperids include the Vipers and the Pit Vipers. Their poison is haemotoxic or haemorrhagic and cytotoxic thus breaking down the tissues and destroying red blood cells. Viperid bitten victims die of massive bleeding. [Ali Reza Khan]