Administration Sonargaon Thana was turned into an upazila in 1983. 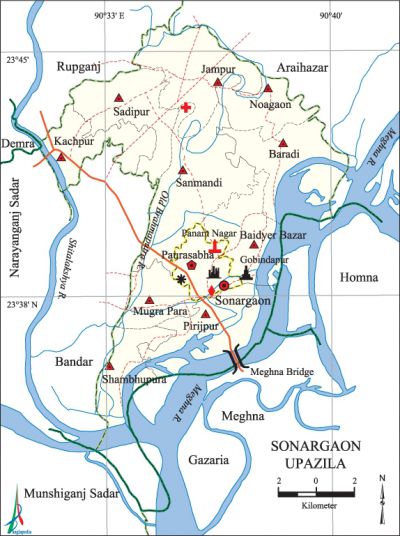 Historical events From 1335 to 1535 AD Sonargaon was sometime thecapital of Bengal and sometimes administrative headquarters of the eastern region of Bengal. The Moroccan traveler ibn battuta visited Sonargaon in 1346 AD. One freedom fighter was killed in an encounter with the Pak army at Panam during the war of liberation. During this time the Pak army conducted mass killing at villages Sanmandi, Pirijpur and Chilarbagh.

Hats, bazars and fairs Hats and bazars are 16, fairs 6, most noted of which are Ananda Bazar Hat, Kaikartek Hat, Folk Art and Crafts Mela, Luknath Brahmachari Mela, Gachhtala Mela at Mangalgram,' Pagla Mela at Hamchadi and Bou Mela at Udbhabganj.