South Talpatti Island' an offshore island emerged along the shallow continental shelf of the bay of bengal under the administrative jurisdiction of shyamnagar upazila in satkhira district. The island is situated in the coastal shallow seas on the Hariabhanga estuary along the south of the border line marked by the Hariabhanga river flowing between Satkhira district of Bangladesh and Bashirhat police station of the district of 24 Parganas in the West Bengal (India). South Talpatti Island is situated between 2137 North latitude and 8912 East longitude. It has been formed by the alluvium deposits carried by various distributaries of the ganges-padma river system. The shape of the island is almost round and appears crescent-shaped when seawater slides down during ebb tide. 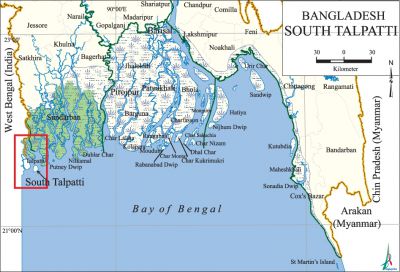 The island is about two kilometres from the mouth of the Hariabhanga. The mid-channel flow of the river Hariabhanga is running by the west coast of the island. To the direct north of the South Talpatti Island lies Talpatti, the extreme south-western mainland of Bangladesh and to the south the unbounded Bay of Bengal. The total area of the island at present is approximately 10 square kilometres. The area of the landmass of the island fluctuates between approximately 7 sq km and 14 sq km during the highest and lowest height of high and low tides. The emergence of the Island took place immediately out of the devastating cyclone hit the south Gangetic delta region in October 1970.

The settlement of the boundaries between Bangladesh and India has been reached on the basis of the Radcliffe Award. Under the Radcliffe Award, in the case of borders divided by rivers, the 'Mid-channel Flow' principle of 'Thalweg Doctrine' has been recognised as the international boundary between the two countries. The middle line of the mid-channel flow (Thalweg doctrine) of Hariabhanga which is the local borderline of Bangladesh and India is clearly flowing along the western side of South Talpatti Island. Based on this principle the Khulna district administration and the survey department registered the island by the name South Talpatti in their administrative documents. The island has been christened South Talpatti by Bangladesh due to its location to the south of Talpatti under Shyamnagar upazila of Satkhira district (former greater Khulna district).

The remote sensing image of the island was taken in 1974 for the first time by ERTS land resource satellite of the United States. At that time the average area of the island was 2,500 sq meters. Subsequently, various remote sensing coinages and surveys showed that the area of the island had been expanding gradually and at present the average volume of the total emerged landmass is about 10,000 sq meters. At present, a number of submerged shoals are being visualised on the north and southeast side of the island near the Hariabhanga estuary. The most recent satellite pictures show the existence of a vast submerged landmass in the shallow seawaters around South Talpatti. These data indicate that the total area of South Talpatti Island will surpass 25 to 30 sq km' in near future.

South Talpatti Island is about 3.5 km at length to the north and south and about 3 km width at the most across east and west. The newly emerged land is stretching more along the north and southeast of the Island. Siltation at the western part of the island is being hindered following the mid-channel flow of the Hariabhanga river. The highest elevation of the island is only 1.3m high above the sea level. A shallow lagoon has been formed from the middle to the last fringe of the northern post with the gradual lowering of the northern elevation. The northern part of the lagoon is open and the eastern and western side is bound by narrow strip of land-arms. The lagoon remains almost dry all the time excepting high tide. The bottom of the lagoon is muddy.

Average depth of the coastal sea stretching ten kilometres surrounding the South Talpatti Island ranges between 3m and 5.5m only. The deep oceanic creek - swatch of no ground is positioned straightway about 43 kilometres south of the island. Innumerable shallow submerged sandy tracts have been formed in almost three sides of the island saving the west. The geological expansion tendency of the island is basically prolonged to southeast direction from the northwest. Examination of the coastal geophysical condition infers that South Talpatti Island and its submerged landmass on the north is connected with the mainland Talpatti (Bangladesh) to the north by shallow submerged alluvium depositional soil. The average depth of this submerged depositional streak during ebb tide remains only between 2 and 2.5m.

The influence of the Bay of Bengal in the land formation of the southern part of South Talpatti Island fashioned by the twin-rivers of Hariabhanga and Raymangal is enormous. On the southern part of the Island coastland mingled with mainly sand and clay is found while on the north and east sediment-clay and clayey plain land is observed. Coastal mangrove forest is being raised along the south and southeast coast of the Island for the last few years.

Cyclone and tidal bore often strike the coastal lands along the Bay of Bengal including South Talpatti Island. These natural hazards render significant influence in both the geophysical processes of land erosion and sedimentation in South Talpatti Island. Some times the island is totally plunged by seawater at the time of devastating storm, high tide or flooding.

The following geomorphological patterns are found in the small area of South Talpatti Island: (a) tidal floodplains; (b) tidal bogs and wetlands; (c) shoals formed by river deposits; (d) river borne clayey lowlands; (e) river eroded continental coast in the east; and (f) sandy-beach in the southeast. River borne sediment and clay played pivotal role in the formation of the island. Accumulation of comparatively bigger granular sand is particularly noticeable in the south and west of the Island. [Masud Hasan Chowdhury]