Spice any aromatic plant, plant part, or plant product used as a condiment or for flavouring food. The value of spices is due to the presence of aroma, the essential oil. Spices are not treated as food because they lack the requisite nutritional value. These are mostly obtained from tropical plants, and once were among the first objects of commerce between the east and west. The quest of spices was once a powerful force in world history. The search of a sea route to the spice islands of the east led to the voyages of Vasco-da-Gama, Columbus, Magellan and many others and finally the formation of the Portuguese, Dutch and east india company. 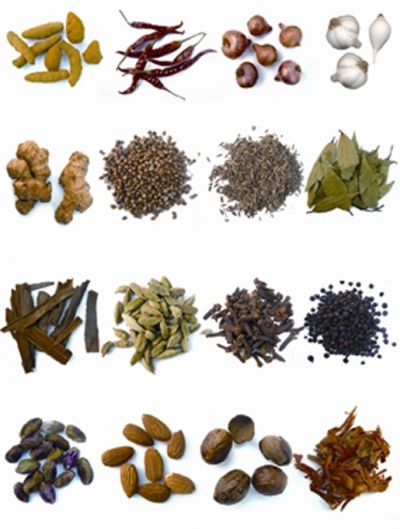 A good number of spices are cultivated and used in almost all preparation of food. Yet a large number of spices are imported from India, Malaysia and Indonesia. The commonly cultivated spices in Bangladesh are ginger, garlic, turmeric, onion, red pepper, coriander, Indian cassia, peppermint, etc. The young coriander plant is commonly used as a flavouring or a savoury for vegetable and fish curry preparations. The area and production of spices and condiments during 2004-05 were respectively about 23,617 ha and 23,865 m tons.

Other common but important spices are cardamom, clove, almond, nutmeg, joyphal, cumin, and opium seeds. The popular garam masala, is the combination of clove, black pepper, cinnamon and cardamom and is used mostly in special meat curries and rice preparations. They are also used in preparing many kinds of foodstuff and sweets. Some spices like black pepper, ginger, long pepper, clove, peppermint, ajowan, fenugreek are used in traditional and folk medicine. [Mostafa Kamal Pasha]