Sunamganj District (sylhet division) area 3,669.58 sq km, located in between 24°34' and 25°12' north latitudes and in between 90°56' and 91°49' east longitudes. It is bounded by Meghalaya state of India on the north, habiganj and kishoreganj districts on the south, sylhet district on the east, netrokona district on the west.

Administration Sunamganj Sub-division was upgraded to a district in 1984. Municipality was formed in 1960. Of the eleven upazilas of the district dharmpasha is the largest (496.03 sq km) and bishwambarpur is the smallest (194.25 sq km). 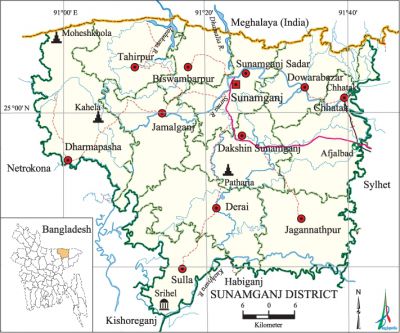