Surma-Meghna River System one of the three major river systems of Bangladesh. It is the longest river (669 km) system in the country. It also drains one of the world's heaviest rainfall areas (e.g about 1,000 cm at Cherapunji, Meghalaya, India). East of brahmaputra-jamuna river system is Surma-Meghna River System. The surma originates in the hills of Shillong and Meghalaya of India. The main source is barak river, which has a considerable catchment in the ridge and valley terrain of Naga-Manipur hills bordering Myanmar. Barak-Meghna has a length of 950 km of which 340 km lies within Bangladesh. On reaching the border with Bangladesh at Amalshid in Sylhet district, Barak bifurcates to form the steep and highly flashy rivers Surma and kushiyara. 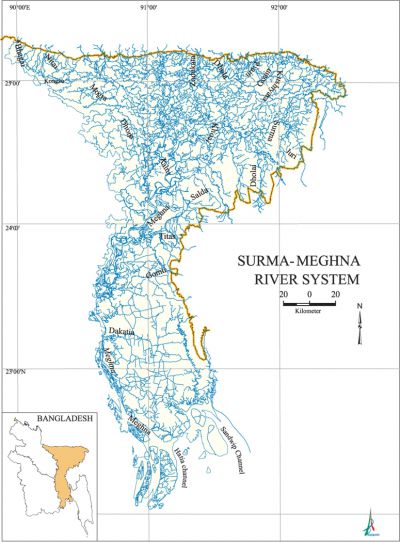 Surma flows west and then southwest to Sylhet town. From there it flows northwest and west to Sunamganj town. Then it maintains a course southwest and then south to Markuli to meet Kushiyara. The joint course flows upto Bhairab Bazar as the Kalni. Flowing north of the Sylhet basin, Surma receives tributaries from Khasi and Jaintia Hills of shillong plateau. East to west they are Lubha, Hari, Goyain Gang, piyain, Bogapani, Jadukata, Shomeshwari, kangsa and Mogra. Surma bifurcates south of Mohanganj soon after it receives Kangsa and further south the Mogra. The western channel is known as Dhanu in its upper course, Boulai in the middle and Ghorautra lower down. It joins Kalni near Bhairab Bazar of Kishoreganj district and the name meghna is given to the course from this confluence to the bay of bengal. Meghna receives old brahmaputra on its right-bank at Bhairab Bazar and on the way to the Bay it carries the water of padma from Chandpur.

Kushiyara receives left bank tributaries from tripura hills, the principal ones being Manu, north of Maulvi Bazar town and bifurcates into northern channel, the Bibiyana and a southern one, which resumes the original name, Barak. Bibiyana changes its name to Kalni lower down its course and joins Surma near Ajmiriganj. Barak receives Gopla and khowai from Tripura Hills and falls into Surma at Madna. Unlike Surma, the tributaries of Kushiyara are less violent although prone to producing flash floods in part due to lesser elevations and rainfall of Tripura Hills.

Between Surma and Kushiyara, there lies a complex basin area comprised of depressions (haors). Most of the Surma system falls in the Haor basin, where the line of drainage is not clear or well defined. In the piedmont tract from Durgapur to Jaintiapur, the network of streams and channels overflows in the rainy season and creates vast sheets of water which connect the haors with the rivers.

Meghna has two distinct parts. Upper Meghna from Bhairab Bazar to Shaitnol is comparatively a small river. Lower Meghna below Shaitnol is one of the largest rivers in the world, because it is the mouth of Ganges-Padma and Brahmaputra-Jamuna rivers. It is a tidal reach carrying almost the entire fluvial discharge of Ganges, Brahmaputra and Upper Meghna river. The net discharge through this river varies from 10,000 cumec in the dry season to 160,000 cumec in the wet season. A little above the confluence, Meghna has a railway bridge over it. The width of the river there is three quarters of a kilometre.

Several small channels branch out from Meghna, meander through the low land bordering the marginal tippera surface, fed by a number of hill streams and rejoin the main river downstream. The most important of these offshoots is Titas, which takes off south of Chatalpar and after meandering through two long-bends, extending over 240 km rejoins the Meghna through two channels in nabinagar upazila. It receives the Howrah hill stream near Akhaura. Brahmanbaria and Akhaura are both on the banks of this river. Other offshoots of the Meghna are Pagli, Katalia, Dhanagoda, Matlab and Udhamdi. Meghna and these offshoots receive the waters of a number of streams from Tripura Hills including gumti, Howrah, Kagni, Senai Buri, Hari, Mangal, Kakri, Pagli, Kurulia, Balujuri, Sonaichhari, Handachhora, Jangalia and Durduria. All of these are liable to flash floods, but Gumti, Kakri and Howrah are the major ones. They have silted their beds to the extent that they now flow above the mean level of the land when brimful. Embankments have been built to contain them. Every other year one or the other of these streams overflow and cause considerable damage to crops, livestock and houses.

The tectonic evolution indicates that the Meghna-Old Brahmaputra drainage post-dates the Ganges drainage when the main channel of the Ganges was the sole drainage beside calcutta. As a consequence, the delta of the old Brahmaputra-Meghna river system covers a very small area compared to the Ganges delta. Addition of the water of the Padma in recent years has not been able to make any significant contribution in enlarging the delta.

The present deltaic Meghna, being the combination of Padma and Meghna, is the largest river in Bangladesh. From the beginning of the delta small islands create two main channels. The larger eastern channel and the smaller western channel measured five to eight kilometres and about two kilometres in width respectively. Near Muladi, Shafipur is an offshoot from the western bank.

Further south, Meghna is divided into three channels, which are, from west to east, Ilsha, Shahbazpur and Bamni. The Ilsha channel, 5-6.5 km wide, separates Bhola from the Barisal mainland. The Shahbazpur channel, 5-8 km wide, flows between Bhola and Ramgati-Hatiya islands. The Bamni, which used to flow between the islands of Ramgati, and Char Lakkhi and Noakhali mainland forming the main outlet of the Meghna, does not seem to exist now. The estuary of Meghna may be considered to be Ilsha and Shahbazpur, which together have a width of 32 km at the sea front.

Gumti falls into Meghna at Daudkandi. Another tributary from Tippera Surface is dakatia. The main source of this river was Kakrai, but the little feni cuts back and captured this upper portion. Dakatia now has its source in Chauddagram khal (canal), which connects it with Little Feni. Dakatia sends out a channel southwards, which forms the Noakhali khal. The main channel meanders westward to Shakherhat, from where the old course goes south to join Meghna at Raipur, and the new and stronger channel passes through Chandpur khal to join west of Chandpur town. For three-fourths of the year tidal currents feed the Dakatia from Meghna. Little Feni follows a very tortuous course southward, and falls into Meghna estuary, southeast of Companiganj and a few kilometres from Big Feni estuary. Little Feni is a tidal river; in the rainy season its flow is around 15,000 cusec. [Masud Hasan Chowdhury and Md Mahbub Murshed]