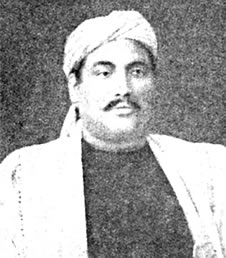 Tagore, Ganendranath (1841-1869) one the founders of the hindu mela and a proto- nationalist. Born in the Kolkata Jorasanko tagore family, Ganendranath Tagore, a nephew of debendranath tagore, made his mark as an organiser of traditional nationalism. He was not against British rule.

Ganendranath conceptualized nationalism as a self-reliant Hindu system of culture and production that was not in any conflict with other nations and communities. He followed both Hindu and Brahma systems of religions and castes. Ganendranath’s fame rests on his contributions to music, drama and nationalist discourse. He supported Nabagopal Mitra in organising and financing the Hindu Mela which he also served as its founding secretary. The object of the Hindu Mela was to inculcate a patriotic attitude towards indigenous culture and production. He composed many patriotic songs, one of which was sung as an opening song of the Hindu Mela. Ganendramohan was also an ardent writer and translated kalidasa’s Vikramorvashiya into Bangla (1869).  [Sirajul Islam]