Tagore Family made its way to social eminence in the eighteenth century first as banians to the European traders in Bengal and then in the early nineteenth century as business entrepreneurs, landholders, religious leaders, administrators, litterateurs, legal practitioners, social activists. The Tagores, like most other successful Brahmin and Thakur families of Bengal, trace their descent from Bhattanarayan, the legendary chief of the five Brahmins who, as the legend goes, is said to have come from Kanauj in the eleventh century in order to bring purity in the otherwise impure religious ways of the Hindu society in Bengal. But objective researchers assert that Joyram Tagore (d.1762), the first historical figure, came from a member of a degraded subcaste in Jessore called Pirali Brahmin. An ancestor of Joyram is said to have polluted himself by interacting with a local Muslim fakir and allowing some of his family members to get converted to Islam, and thus the family became socially dubbed as the outcast Pirali Brahmin. 'Joyram worked as an amin in the settlement operation of the 24- Parganas when Nawab Mir Zafar gifted the territory to robert clive as a personal jaygir in 1757. Formerly Joyram worked with the French as their banian in Chandannagar. He settled in Govindapur, one of the three villages of the East India Company bought from the emperor in 1690. From Joyram the history of the Tagores of Calcutta began. The English called him Tagore, instead of Thakur. However, by the early 20th century the Thakurs were all pronounced 'Thakur' in English, excepting only one name, kabindranath tagore . 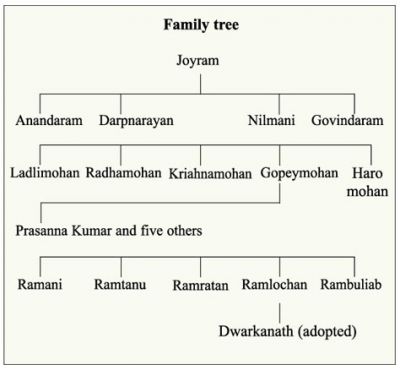 Darpanarayan Tagore (d. 1791), who settled in Pathuriaghata of Calcutta, formed the senior branch of the family. His brother Nilamani Tagore, who made his early fortune by working as the East India Company's serestadar in Chittagong, settled in Mechuabazar, which later came to be known as Jorasanko, the home of the junior branch. 'Both the brothers made good fortune from their dealings with the English as their banians. After the permanent settlement, which created a vibrant land market under the operation of the Permanent Settlement laws, both the brothers bought extensive zamindari estates in various districts of Bengal. In the Calcutta society, the Tagores were categorised until the end of the nineteenth century, as senior and junior branches.

The Tagores of Pathuriaghata- senior branch The first celebrity of the senior branch was Gopimohan Tagore (1760-1818), who made immense fortune as a banian to the English and the French traders. He bought many landed estates around Bengal and made himself a leading bhadralok in Calcutta. All banians of the time were mainly interpreters to their European business employers. Gopimohan was very exceptional as a banian in the sense that he acquired proficiency in many languages, such as English, French, Dutch, Portuguese, Sanskrit, Persian and Urdu. He was one of the founding members and a principal financier of the hindu college (1816). Gopimohan's son Prasanna Kumar Tagore (1801-1868) left family business and zamindari management to other members of the family and himself became a legal practitioner in the Sadr Diwani Adalat. He made fabulous income from his legal practice and bought additional landed estates for the family. He organized the formation of the Landholders' Society. He was also a founding member of the british indian association, the precursor of the indian national congress. He made a big endowment at the university of calcutta to organise an annual lecture called Tagore Law Lecture to be given by famous jurists, which is still operative. Prasanna Kumar Tagore founded the first modern Indian theatre in Calcutta called the Hindu Theatre. When the Indian Legislative Council with Indian participation was established for the first time in 1861, Prasanna Kumar Tagore was made its first Indian member. Prasanna Kumar's son Gnanendramohan Tagore (1826-1890) converted to Christianity and married Kamalmani, the daughter of krishna mohan banerjee . He was disinherited for his conduct. This is the Tagore family's second conversion case. The earlier conversion took place in the family's ancestral village home several generations earlier when three members of the family is said to have been converted to Islam. The incident led the Brahmin class to degrade the family with the social epithet pirali brahmin, that is, brahmin disciples of a Muslim pir. Gnanendramohan went to England and became the first Indian to become a barrister.

jatindramohan tagore (1831-1908), contributed remarkably to the development of theatre in Calcutta. He himself was a great actor. He was one great patron of Michael madhusudan dutt. In 1865, he established Babganatyalaya at Pathuriaghata. He was also adept in music and patronized many musicians. Jatindramohan patronized Kshetra Mohan Ghoswami in his experiments to introduce orchestra to Indian music. He was once elected the president of the british indian association. He was the first Indian to become a member of the Royal Photographic Society. Ramanath Tagore (d. 1877) and Jatindramohan Tagore were great patrons of the practice of European art in Bengal. The Tagore Bhavan at Pathuriaghata had a massive collections of European painters. Shoutindramohan Tagore (d. 1898) was one of the earliest Indians to have studied art at the Royal Academy.

In music, shaurindra mohan tagore (d. 1914) made comparative studies of eastern and western music and was awarded the doctor of music by Philadelphia University in 1875. He also made another Ph.D. at Oxford University in 1896. He founded the Banga Sangit Vidyalaya in 1871 and the Bengal Academy of Music in 1881. Shourindramohan was honoured by the Shah of Iran with the title of Nawab Shahzada and the British Government honoured him with the Knight Bachelor of the United Kingdom.

The Tagores of Jorasanko- the Junior Branch The first celebrity of the junior branch of the Tagore family was dwarkanath tagore (1794-1846). He was the son of Nilmani Tagore's second son, Rammani Tagore. Nilmani's first son Ramlochan Tagore was childless and he adopted Dwarkanath. He got education from an English seminary of Calcutta and started his career as a sherestadar in the government's revenue department. Soon he left service and started his entrepreneurial career and became one of the richest entrepreneurs in Bengal in the 1820s. Dwarkanath's fortune was invested in banking, landholding, partnership with the European business houses, plantation, shipping, mining and so on. He was the closest friend of raja rammohan roy, though he was not a reforming mind himself. Personally he was a Vaishnavite, and a believer in social and economic development of Bengal through rapid westernization of the country under the stewardship of the British. He visited Britain and there he displayed his wealth so glaringly that he got the epithet 'prince' from his British friends. But his fortune did not last long. He became a victim of the great depression of the 1830s, when most of the great business houses both European and native were collapsing. 'Prince' Dwarkanath lost almost all his fortune other than some few landed estates, which his son de B endranath tagore rescued from almost inevitable revenue default and sale under the operation of the' 'sun-set' law. Almost all his life was spent to make the family free from encumbrances. girindranath tagore (1820-1854) and nagendranath tagore (1829-1858) were Another two son of Dwarkanath's.Ganendranath Tagore son of Girindranath was one of the founder of Hindu Mela. Ganendranath's fame rests on his contributions to music, drama and nationalist discourse.

From the 1840s, the Tagores are seen to have been making major shifts in their entrepreneurial family tradition. From the 1840s they tended to shift from business to landholding, government service and creative pursuits. satyendranath tagore (1842-1923), son of Devendranath Tagore, became the first Indian to become a member of the coveted indian civil service through open competitive examinations held in London in 1864. Satyendranath and his brother Jnanendranath were among the first students to pass the Entrance Examination of Calcutta University in 1857. Jnanendranath was the first person to write modern nationalist songs, many of which are still popular. He was the editor of the famous tattvabodhini patrika and took active interest in organizing hindu mela. jyotirindranath tagore (1849-1925) was a scholar, artist, music composer and a theatre personality. He wrote many plays and directed and acted in many of them. He was also a composer of songs. He was the founder of Adi Brahma Samaj Sangit vidyalay (School for Brahma songs). However, Jyotirindranath was mainly known for his contributions in painting. His selected paintings were published in London in 1914.

Devendranath's youngest son, rabindranath tagore (1861-1941) was the first Asian to win the Nobel Prize in literature. His contributions to Bangla literature and Nobel Prize took the bangla language to a new height of development. Two compositions of Rabindranath Tagore are now the national anthems of two countries: India and Bangladesh. He coined the word 'Mahatma' for the saintly leader Mohandas Karamchand Gandhi.

Gaganendranath Tagore (1867-1938), Abanindranath Tagore (1871-1951), and Sunayani (1875-1962) made great reputation in the field of art. They played the pioneering role in the development of different genres of painting. Abanindranath Tagore is taken as the founder of modern Bengal School of Art. Dwijendranath's second son Sudhindranath Tagore (1869-1929) was a renowned author. His son Soumyendranath (1901-74) was a leading leftist politician, and worked in favour Bangladesh war of liberation. Sharmila Thakur, a Mumbai cinema artist is one of the most contemporary celebrities of the Tagore family. [Sirajul Islam]