Tuber Crop stem or root modified into swollen organs to store food materials. They are rich in carbohydrates, mainly starch, and are used as staple food or supplementary food; they can also be processed into industrial products like starch, alcohol and pharmaceuticals. The important tuber crops grown in Bangladesh include potato, sweet potato, aroid, yam, cassava and yam bean. 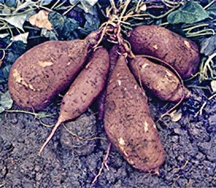 Potato locally known as alu, is an important vegetable and a supplementary food crop in Bangladesh, occupying the second place in production after rice and wheat, and third place after rice and wheat in acreage. In Bangladesh, the area and annual production of potato were about 0.74 million acres and 42,00,000 m tons, respectively in 2005-06. Two main categories of potatoes are grown in Bangladesh: indigenous varieties (lal sheel, lal pakri, hagrai, etc) and exotic high yielding varieties. The indigenous varieties are, in reality, exotic varieties, which were introduced at least six decades ago. They are mostly cultivated in the northwestern part of the country, and cover about 35% of the total potato area. Their tubers are small with very low yields (average 7.6 m ton/ha). However, they sell at a higher price. The high yielding potato varieties have been introduced/developed in Bangladesh after 1960.

Sweet potato, Ipomoea batatas of the family Convolvulaceae, is a dicotyledonous, herbaceous and perennial vine normally cultivated as an annual; it is locally known as mitha alu or misti Alu or shakarkanda alu. Cultivation is generally propagated from vine cuttings. The edible parts are the swollen storage roots. It grows best in areas of warm days and warm nights. In Bangladesh, sweet potato is an important supplementary food and is also used as a vegetable throughout the country; young stems and leaves are used as vegetables as well as fodder. The average yield is about 10 m ton/ha. The released sweet potato varieties in Bangladesh are kamala sundari (40-45 m ton/ha), tripti (40-50 m ton/ha), daulatpuri (30-35 m ton/ha), BARI Sweet Potato-4 (30-35 m ton/ha) and BARI Sweet Potato-5 (35-40 m ton/ha).

Aroids, locally known as kachu, are monocotyledonous herbaceous plants of family Araceae, and are among the oldest domesticated plants and grow in moist and shady places. Its enlarged root act as storage organs and are mostly eaten. Some aroids are terrestrial, while others are vines, creepers or climbers; many are also epiphytes. Some are cultivated and used as food, others are used as ornamentals and a few have medicinal value.

Yams, locally called gachh alu, machh alu, pesta alu, sada pesta, mom alu, goichha alu, boroi alu, and bel alu, are members of the genus Dioscorea of the family Dioscoreaceae and produce tubers, bulbils, or rhizomes that have economic importance. They are found all over the country, but not grown commercially. Edible yams are normally propagated by small tubers (seed yams), cuttings of the tubers, or bulbils. The species grown in Bangladesh are Dioscorea alata, D. esculenta (high yielder), D. bulbifera and D. dumetorum.

Cassava, Manihot esculenta, of the family Euphorbiaceae, is a perennial shrub with enlarged tuberous root. The roots, which resemble sweet potatoes and are eaten in much the same way, yield cassava starch, a staple food; they are used also as animal and poultry feeds. The plant reaches 1 to 4 m and is grown in an area of about 816 ha, and has an average yield of about 12 m ton/ha. Cultivation is confined mostly to the hilly areas of Mymensingh and the chittagong hill tracts where tribal people consume it as a supplementary staple food.

Yam bean, locally known as shak alu, Pachyrrhizus erosus is a herbaceous climbing vine with large white or violet flowers; propagation is either by stem cuttings, tubers, or by seeds, usually planted on prepared beds. The brownish roots have thick, tough skins that peel off, exposing the white flesh beneath; they germinate in 1-3 weeks. Tubers (these look like white sweet potato) are usually harvested after the plants are 6-11 months old. The young brown-skinned and white-fleshed roots are juicy, sweet and crispy, and often eaten raw as a snack food and cooked as a vegetable. In Bangladesh, it is available in the hot days of April-May and is used to quench thirst. It grows well in some areas of Sirajganj and Pabna districts.