Administration Wazirpur Thana was turned into an upazila in 1983. 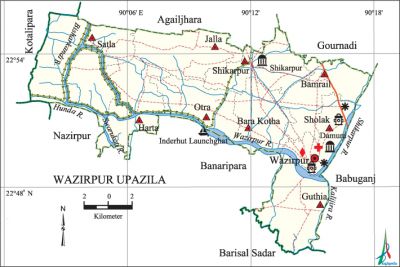 History of the War of Liberation The headquarters of Sector 9 of the war of liberation was established at Dargah Bari of village Bara Kotha. In 1971 the Pak army burnt more than three hundred houses and killed many people by gunshot at village Dhamura. A direct encounter was held between the freedom fighters and the Pak army at village Bagrarpar in which many Pak soldiers were killed.

Hats, bazars and fairs Hats and bazars are 22, fairs 8, most noted of which are Dhamura Hat, Harta Hat and Shikarpur Mela.

Natural disasters The cyclone and earthquake of 1762 changed the formation of land of the region and turned the high land into beel. The flood of 1787 caused heavy damages to crops of the upazila. Many people were victims of the cyclones of 1770, 1822, 1825, 1832, 1855, 1909 and 1960. These cyclones also caused heavy damages to settlements and other properties of the upazila.