Akhaura Upazila (brahmanbaria district) area 99.28 sq km, located in between 23°47' and 23°54' north latitudes and in between 91°07' and 91°15' east longitudes. It is bounded by brahmanbaria sadar upazila on the north, kasba upazila on the south, Tripura State of India on the east and Brahmanbaria Sadar and Kasba upazilas on the west. Once upon a time Akhaura is included in the Tripura province of India. Recently Akhaura is an important railway junction of Bangladesh. Now this junction has a connection with chittagong, sylhet, dhaka and mymensingh.

Administration Akhaura Thana was formed on 20 June 1976 and it was turned into an upazila in 1983. Akhaura Paurasabha was formed in 1999. 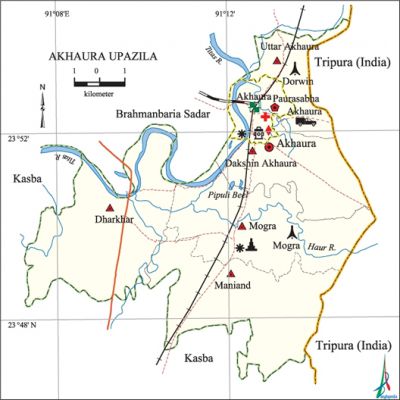 History of the War of Liberation During the war of liberation in 1971 Akhaura was under Sector 2. The important battle fields of the upazila were Akhaura, Devgram, Taragan, Check post road and Daruin. Bir Shrestha Sipahi mohammad mostafa kamal was killed on 18 April 1971 in a frontal encounter with the Pak army at village Daruin. The tomb of Birshrestha Sipahi Mostafa Kamal is located in this village.

Marks of War of Liberation Mass grave 2 (western bank of the Mogra Gangasagar Dighi and at Senarbadi of Akhaura-Tripura border).

Hats, bazars and fairs Hats and bazars are 32; most noted of which are Mogra, Akhaura bazars and Dharkhar and Kalibari's Vatamatha melas.