Bengal Basin a term used to describe both a surface physiographic feature and a geological feature deep underground. The first is familiar to geographers and the other to geologists. The geological feature is a downwarping of the basement rocks beneath central and southern Bangladesh under pressure of sediments laid down since the Cretaceous age (63 to 135 million years before the present). This Basin represents the most important of the three tectonic divisions of the country. The deep Basin began forming when Late Cretaceous orogeny caused the rise of the Arakan Yoma mountains along the eastern border of Bangladesh, and formed the Assam Gulf. This Gulf apparently had an ecosystem conductive to the profuse growth of phyto- and zoo-planktons and benthic organisms. Over millions of years this led to the deposition of an enormous quantity of carbonate sediments, which now dominantly compose the tura formation, Sylhet Limestone and Kopili formations. In the Late Eocene period (36 to 43 million years before the present) the conditions in the Gulf changed and such deposits virtually ceased. With further two epigenies the enormous surface deposits created a fluvio-deltaic condition. The sinking of the mountains in dinajpur and rangpur led to the diversion of the ganges and brahmaputra rivers into this Basin. These rivers poured in an enormous load of sediments, which made the Basement floor of the Basin sink several kilometres. In most parts of the Basin the base sank 6 to 8 km, but along the present alignment of the lower meghna it has sunk 10 to 12 km. The very active tectonics of the northeast of this Basin has led to uplifting of the madhupur tract and compensatory sinking of the Jamuna valley. 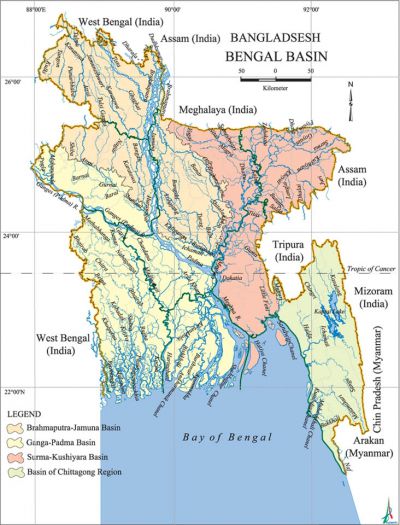 Geographically, the Bengal Basin is a surface physiographic unit, comprising the entire lowland bounded by the Chhota Nagpur Plateau and rajmahal hills in the west, the Himalayan foothills in the north, the Meghalaya Plateau in the northeast and the Manipur-Tripura hills in the east. The feni river separates the Basin from the chittagong region in the southeast. The entire southern boundary is along the bay of bengal, where the Basin surface slopes into the bengal deep sea fan. In the north the boundary of the Basin in the Ganges plain and along the Assam valley is not well defined, and has to be arbitrarily set. In the northeast the Cachar plain is clearly demarcated by the hills and mountains on three sides.

One reason for differentiating this area from the Ganges valley is that it emerged from the Assam Gulf long after that valley was filled in. Another reason is that it contains successive deltas of the combined flows of the Ganges and Brahmaputra rivers. The earliest delta in the north has left behind the uplands of the Barind and Madhupur Tracts. Other delta deposits have become buried under newer deposits or have been destroyed by frequent shifts of the mighty rivers. At present the Bengal Basin contains two major pleistocene terraces (the Madhupur Tract and the barind tracts), the active floodplains of the Ganges, Brahmaputra and meghna rivers, and more than a dozen smaller rivers, and the Moribund delta of the Ganges which includes the immature delta containing the sundarbans where the land surface is still below the high tide level. It also includes many deltaic islands along the sea-face and in the Meghna estuary. The average height of the Basin above sea level increases from 2m near the sea-face to over 100m near the Himalayan foothills. Most of the Basin is between 5 and 10 metres above mean sea level and is therefore one of the lowest plains in the world. This of course makes it very vulnerable to any sea- level rise.

The Bengal Basin has also been used as a biodiversity unit to describe what is known as the Bengalian Rainforest. Once it was one of the richest wildlife areas of the world, with elephants, tigers, wild buffaloes, three species of rhinoceros, and seven species of deer. This rainforest is virtually no more, with fragments displaying different characteristics. Only the Sundarbans forest remains fairly pristine. This is the largest single mangrove forest in the world. In past centuries contiguous non-mangrove forests which also belonged to the Sundarban used to extend far inland. The Bengal Basin used to contain the worlds' largest tropical wetland and some of its most biodiversity-rich forests before human settlement completely changed the landscape. This Basin now contains two hundred million people and two mega cities, dhaka and Kolkata. [DK Guha and Haroun Er Rashid]