Wetland lowlying ecosystem where the groundwater table is always at or near the surface. It includes areas of marsh, fen, bog, floodplain, and shallow coastal areas. Wetland is divided into estuarine and freshwater systems, which may be further subdivided by soil type and plant life. Wetland area is characterised by sluggish or standing water that can create an openwater habitat for wildlife. The Ramsar Convention (1971) has defined wetlands as - 'areas of marsh, fen, peatland, or water, whether natural or artificial, permanent or temporary, with water that is static or flowing, fresh, brackish or salt, including areas of marine water the depth of which at low tide does not exceed six metres. ' Among these two definitions of wetlands, the first one is more focused but somewhat narrower in range of environment than the latter one. The Ramsar definition of wetlands lumps together a wide range of contrasting habitats like fluvial, coastal and marine. However, the Ramsar definition has been adopted and being used in Bangladesh. Based on biological and physical characteristics, 39 categories of wetlands were globally identified; of which 30 are natural and nine man-made. However, wetlands of Bangladesh can be classified on the basis of their hydrological and ecological functions and landtype concept stated in the table.

From an agricultural point of view, soil scientists in Bangladesh adopt a different approach to define wetlands. On the basis of depth and duration of inundation/flooding, the country has been divided into six broad land types: highland, medium highland, medium lowland, lowland, very lowland, and bottomland. Among these land classes, medium lowland (which remains flooded up to a depth of 180 cm during monsoon) through bottomland (which remains wet throughout the year) are considered as areas of wetlands. 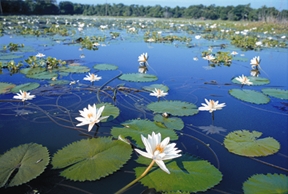 Characteristics being located in the lower edge of the topography, wetlands are subject to periodic inundation/flooding, shallow to deep, during wet monsoon. To understand the hydro-geomorphological characteristics of the wetlands, a typical haor may be considered as an ideal example. Based on elevation and hydrology, a haor may be divided into three parts- foothill, floodplains and the deeply-flooded area. The foothill parts are the most elevated among the three zones and treated as accretion zone where rapid siltation of coarser materials take place along the levees by flashy rivers due to the fall of gradient. Across the down-slope of levees lie the backswamp where volume of siltation is graded and minimum. The backswamps act as reservoir by storing water and sediment. During high flood stage, water overlaps the banks and concentrates into the backswamp; as a result flood peak is substantially reduced at the downstream. Again, as floodwater recede the backswamp drains into the river, enhancing the downstream flow. The floodplains lying at the middle, having relatively milder slopes, receive moderately finer sediments but considerably lower in volume. The backswamps along this section fill and drain several times in each monsoon, thus helping to reduce flood peak downstream. The beel is the third part, the deepest part of the wetlands. During monsoon the beels and floodplains become deeply flooded and turn into a single water reservoir. The Surma-Kushiyara-Meghna basin and the baors of Jessore, Khulna and Faridpur districts are good examples of such wetlands.

The wetland soils in Bangladesh may be grouped into two broad classes - organic and mineral. The organic soils cover an area of about 74,000 ha and distributed in the low-lying basins all over Bangladesh, of which the Gopalganj-Khulna Beel areas top in areal extent. Mineral soils forming under the wetland conditions are the most extensive in Bangladesh. Soil organic carbon accounts for 0.1-40% of wetland soils. In most of Bangladesh's mineral wetland soils, organic content is very low and more than half of the soils have organic matter in the range of one to two percent.

Geographical distribution the total area under wetlands in Bangladesh has been variously estimated at seven to eight million hectares, which is about 50% of the total land surface. The areal extent of wetlands under various categories are given in the following:

The lower Atrai basin occupies a low-lying area between the barind tract and the Ganges River floodplain. The basin receives water primarily from Atrai and jamuna rivers and a small part from the ganges distributaries with the runoff water from the Barind Tract. This area remains deeply flooded during wet monsoon. Lower Punarbhaba floodplain occupies a narrow strip of floodplain along the lower course of the punarbhaba in the west of Naogaon and north of Nawabganj districts. The typical topography comprises broad ridges and basins, with beels occupying the basin centres. Most of the area is deeply flooded in the rainy season and is subject to flash floods. Gopalganj-Khulna Beel area lies between the Ganges floodplain and the Ganges tidal floodplain and it has been divided by a number of separate basins by ridges of Ganges alluvium adjoining the rivers, which pass through the area. The basin-centre lies almost at sea level and remains deeply flooded in the rainy season and hold water throughout the year. The slightly higher basin margins are moderate to deeply flooded and remains wet for over nine months. Arial Beel occupies a lowlying basin between the Ganges floodplain and the Young Brahmaputra floodplain south of greater Dhaka district. Seasonal flooding is deep in the basin-centre and moderately deep on the higher margins. The centre of the basin remains wet for most of the dry season. Surma-Kushiyara floodplain area includes the meander floodplains of the Surma and Kushiyara and their hilly tributaries and distributaries have formed extensive, lowlying depressions (haors) called Sylhet basin. Seasonal flooding starts early mid-May and continues up to December-January, with a flooding depth of more than five metres in the basin centre. The deepest part of the basin remains wet throughout the year, only ridges get dry from January onward.

Importance the wetlands have a wide range of ecological, socio-cultural, economic and commercial importance and values in Bangladesh. These are important habitats for a large variety of flora and fauna of local, national and regional significance. In the freshwater wetlands the floral composition includes trees (eg Hijal (Barringtonia acutangula), Madar (Erythrina variegata), Gab (Diospyros peregrina), Jaldumur (Ficus sp.), Barun (Crataeva nurvala), Chitki (Phyllanthus reticulatus), etc); herbs (eg grass, creepers, thankuni (Centella asiatica), kalmi (Ipomoea aquatica), helencha (Enhydra flactuans), etc); shrubs and aquatic vegetation (eg duckweed, water hyacinth, lotus, water lily). Wetlands are critically important in Bangladesh for human settlements, biodiversity, fisheries, agricultural diversity, navigation and communication, and ecotourism. More than 5,000 species of flowering plants and 1,500 species of vertebrates, of which approximately 750 are birds and over 500 are coastal estuarine and freshwater fish exist in wetland areas. Some 400 vertebrate species and about 300 plant species are dependent on wetlands for all or part of their life spans. Freshwater capture fishery is an important source of employment in the fishery sector and a supply source of animal protein. About 260 species of freshwater fish exist in wetlands of Bangladesh. All wetlands are subject to sedimentation composed of clay soils rich in organic matter, and crops, which can tolerate waterlogging, and inundation cover the vast flood areas of wetland. Before the introduction of mechanised dry-season irrigation in the 1960's, deepwater rice or broadcast aman rice (floating rice) used to be the major crop in the wetlands during the rains.

Development activities over the last three decades, massive physical infrastructures in the form of rural road and flood embankment have been developed in the wetlands including floodplains and haor areas. Many of these infrastructures disregarded local topographic condition and natural water flow direction, which has often resulted in poor drainage or waterlogging and impacted on the local surface water regime. The critical point of such development activities in the wetlands led the transformation very rapidly at a massive scale. In the Ganges-Brahmaputra floodplain area, about 2.1 million ha of wetland have been lost to Flood Control, Drainage and Irrigation development projects (FCDI). Human interference in the wetlands has been damaging the fragile ecosystem and to long term sustainability of the wetlands. For instance, in the southwest brackish water coastal plains of Bangladesh farmers used to have a paddy crop only during monsoon season when surface saline layer is depleted due to rainfall and for rest of the months the field is left for grazing. This cultural practice was established for centuries. However, in the last two decades this has been abandoned for more profitable shrimp farming practice. As a result, local ecosystems are threatened because of changed water exchange system, rapid siltation of the channels and continuous inundation of land with saline water.

In the haor areas, largescale settlement was initiated at the mid-20th century from surrounding densely populated regions and since then the resources of the haor basins are being exploited at an increasing rate causing adverse effects. Continuous largescale exploitation of aquatic vegetation and fruits like Makna (Euryale ferox), Singara (Trapa bispinosa), Lotus, Lily, Hogla (Typha elephantina) has caused serious degradation of the quantity and quality of the habitat required for fish and migratory birds of the haor areas. Similarly, embankment constructed for FCDI projects reduce floodplains and obstruct fish movement and migration from rivers as well as beels to the remaining floodplains for feeding and breeding. As a result, many fishermen have lost their livelihood.

There have been some positive effects of wetland transformation as well. The major impact has been on cropping patterns and intensity. Dependence on local boro has been shifted towards HYV boro. In the FCDI project areas, culture fisheries have replaced the deficit of capture fisheries. The positive impact of development projects in the wetlands relates to improved road transport and communication network. This has led to an enhanced marketing infrastructure and relatively easy access to social and other services. Conversely, the navigation system has been either closed or substantially reduced.

As a whole, degradation of wetlands has caused several problems including extinction and reduction of wildlife, extinction of many indigenous wild and domesticated rice varieties, loss of many indigenous aquatic plants, herbs, shrubs and weeds, loss of natural soil nutrients, loss of natural water reservoirs and of their resultant benefits, increase in the occurrence of flooding and degeneration of wetland based ecosystems, occupations, socio-economic institutions and cultures. Wetlands are dynamic ecosystems, which change over a long time. Despite protection from external threats it may die a natural death (eg due to heavy siltation, changing river courses). Keeping this in mind, transformation of wetlands through human intervention must be carefully undertaken. [Mohd Shamsul Alam and Masud Hasan Chowdhury]