Administration Bhairab Thana was formed in 1906 and it was turned into an upazila in 1983. Bhairab municipality was established in 1958. 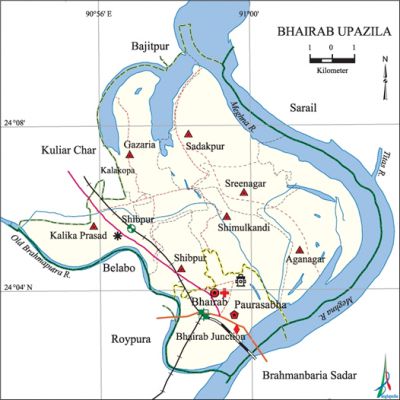 History of the War of Liberation On 15 April 1971 the Pak army killed about four hundred innocent civilians including 250 of village Ibrahimpur' of the upazila. Besides, they also killed many people inside the Manikdi Mosque and at Ashuganj. On 13 December the Pak army destroyed the Bhairab Railway Bridge.

Hats, bazars and fairs Hats and bazars are 40, fairs 3, most noted of which are Bhairab Bazar, Shimulkandi Bazar, Chawk Bazar, Siddik Bazar.

Natural disasters The floods of 1974, 1988, 1998 and 2004 caused heavy loss of life and damage to settlements, livestock, crops and other properties of the upazila.