Bajitpur Upazila (kishoreganj district) area 172.18 sq km, located in between 24°09' and 24°18' north latitudes and in between 90°50' and 91°03' east longitudes. It is bounded by katiadi, nikli and austagram upazilas on the north, kuliarchar, bhairab and sarail upazilas on the south, Austagram and nasirnagar upazilas on the east, Katiadi upazila on the west. 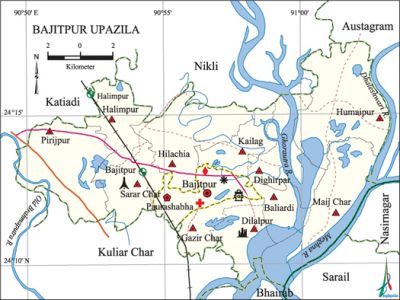 Historical events Dilalpur of this upazila was an important naval port during the British rule. There were indigo planting centres at nearby Gupinathpur and Ghoraghat. Pearl was an important export item to neighbouring countries. The fakir-sannyasi resistance spread over Bajitpur. In 1971 the Pak army brutally killed over 400 innocent persons, and 60 women were violated. On 4 May the Pak army conducted mass killing at Bash Mahal of Shahankhal. During the war of liberation 10 freedom fighters were killed in encounters with the Pak army. Bajitpur was liberated on 26 October 1971.

Natural disasters Many people of this upazila died due to famines of 1943 and 1974. There were serious damages to houses, crops and livestock due to floods of 1988 and 2004. Besides, Maij Char union of this upazila was ransacked by cyclone of 1997.