Chalan Beel one of the largest inland depressions of marshy character and also one of the richest wetland areas of Bangladesh. It is the largest beel of the country and comprises a series of depressions interconnected by various channels to form more or less one continuous sheet of water in the rainy season when it covers an area of about 368 sq km. The beel extends over four adjacent districts, Rajshahi, Pabna, Sirajganj and Natore. The major parts of it cover an extensive area of Raiganj upazila of Sirajganj district and Chatmohar upazila of Pabna district. It lies between Singra upazila (natore district) and the north bank of the river Gumani. The southeastern extremity of the beel is at Astamanisha in Pabna district, close to Nunnagar, where the Gumani and the baral meet. Its northern boundary in this district may be marked by a line drawn from the east of Singra to the Bhadai river, which forms the boundary between Rajshahi, Pabna and Bogra. The eastern boundary may be represented by a line drawn north-south in Pabna and running through Tarash upazila east of the Bhadai. The greatest breadth of the beel is about 13 km from Tarash at the northeast to Narayanpur, near the north bank of the Gumani. Its greatest length is about 24 km from Singra to Kachikata on the Gumani. 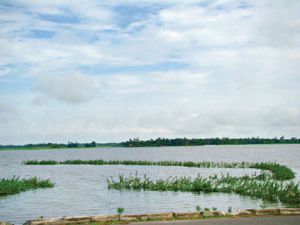 Chalan beel was formed when the old brahmaputra diverted its water into the new channel of the jamuna. Chalan beel was probably a backswamp before it was greatly expanded with the inclusion of abandoned courses of the karatoya and the atrai and became a vast lake. The formation of the Chalan beel is historically linked with the demise of the Atrai and the Baral. The Atrai or the Gur was the principal feeder channel of Chalan beel, which used to drain the districts of Dinajpur and northern Rajshahi. The Baral worked as an outlet of the beel and eventually found its way into the Jamuna. It was about 1,088 sq km in area at the time it was formed.

The southern edge of the beel is skirted by the Gumani, which carries the water of the beel into Bara beel, which in turn carries the water into the Jamuna. During the rainy season the Gumani overflows its banks and pours its water into the beel. When the Jamuna is flooded, the water of the Baral is held up until the Jamuna falls again. During the dry season, the greater part of the beel dries up, leaving a water basin of about 25.9 to 31.08 sq km, which may be called its 'core'. However, the core is not covered with an uninterrupted expanse of water. It remains a collection of shallow sheets of water connected with each other by very tortuous channels. Round the core, there are two concentric irregular shaped oval areas growing rice of the long-stemmed variety, usually known as floating rice. The first 'ring', rather narrow towards the southwest, is covered with 1.53 to 1.83m of water during the rainy season. The west of Chalan beel may be included in the 'outer ring', where water in the rainy season is much less than other parts of the beel. Both the rings dry up entirely between December and June.

Chalan beel is rapidly silting up. During the last century and a half, it has shrunk at least 19.32 km from the southern side due to annual deposits of silt from the ganges. Its other feeder rivers like the Gur and the Baral are also major contributory factors in reducing the size of the beel.

A survey carried out in 1909 by the Public Works Department into drainage and silting up of the beel found that the previous area of about 1,088 sq km have been reduced to about 368 sq km. The remaining area had been reclaimed either for cultivation or settlement. Even in this reduced area, only 86 sq km was found under water all the year round. It was estimated that the feeder rivers had brought 6.3 million cu m of silt a year of which 1.5 million cu m were washed away by different drainage channels coming out of the beel. The remaining 4.8 million cu m had been deposited annually. If distributed uniformly over the whole of 368 sq km, it would have raised the level at the rate of 1.27 cm a year. Another inquiry was made in 1910 to further ascertain the condition of the beel during the dry season. It too found that the area had been further reduced. A third investigation carried out in 1913, ascertained that only 31 to 39 sq km remained under water throughout the year. The banks around the core area were under cultivation and the beel proper had 2.75 to 5.49m of water in April. In the 1950s, various reclamation works reduced the beel to about 25.9 sq km. In 1987, it appeared completely dry except for some small man-made ponds.

Land in Chalan beel is being reclaimed and new villages are springing up alongside. In the dry season, all the smaller and larger beels dry up except their deeper centre. The outlying marginal lands are cultivated with boro and HYV (High Yield Variety) rice in the dry season. In the wet season, the shallow peripheries are cultivated for deep-water aman rice and jute. [Mohd Shamsul Alam and Md Sazzad Hossain]