Administration Natore Sub-division, under Rajshahi district, was established in 1845 and it was turned into a district in 1984. Natore Municipality was formed in 1869. 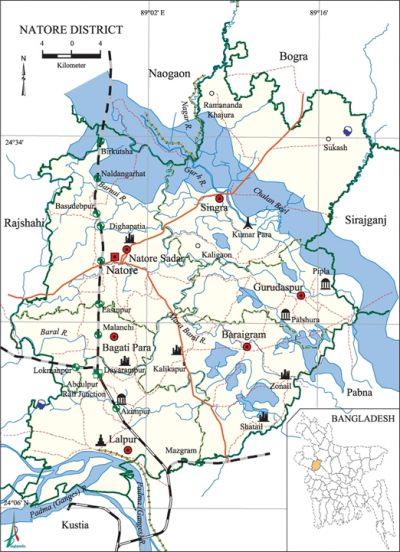 Marks of the War of Liberation Mass grave 5; Memorial monument 2.

Folk culture Notable folk songs of the district include Madarer song, Padmapuran or Manasar song (on the occasion of Manasa Puja), Sona Pirer or Mangar song (in the month of Poush), Yogir song, Murshidi song, etc. The indigenous community of the district observe various festivals such as Karam Festival (to satisfy the nature), Pungtadi Festival, Saharai Festival (expecting good harvest), Danda Katna Festival (expecting peace and prosperity in the family), and traditional songs and dances during Fagua Festival (on the occasion of Dol Purnima). Besides, the people of the district arrange various festivals on the occasions of marriage, plantation and harvest times.