Administration Chandpur sub-division was established in 1878 and was included in Tripura district. It was turned into a district in 1984. 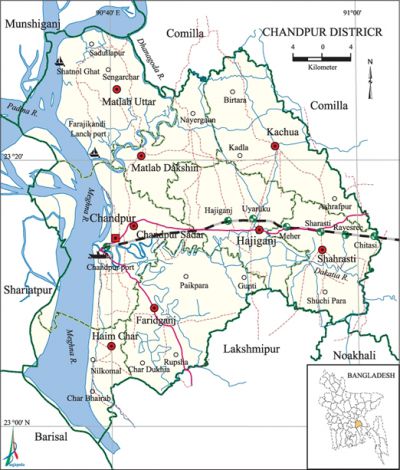 History of the War of Liberation On 12 May 1971 the Pak army brutally killed 50 persons and set many houses on fire at village Kashimpur of hajiganj upazila. After this genocide, the freedom fighters attacked the Pak army in which 17 Pak soldiers were killed and so were 2 freedom fighters. 'A battle was fought between the allied forces and the Pak army near Belpur on the eastern side of Naura, Suchipara and Unkiler under shahrasti upazila in which 35 Pak soldiers were killed and so were 13 members of the allied forces. During the war of liberation a hospital was established at village Nischintapur for giving medical treatment to wounded freedom fighters.

See also  Upazilas of the district.