Ekushey February now also called just Ekushey, 21 February, Shaheed Dibas (Martyrs' Day) and, since 2000, international mother language day. On 21 February 1952, corresponding to 8 Falgun 1359 in the Bangla calendar, a number of students campaigning for the recognition of Bangla as one of the state languages of pakistan were killed when police fired upon them. 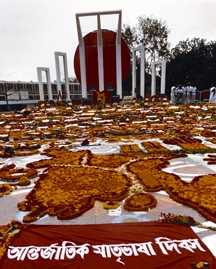 Even before the creation of Pakistan in 1947, there had been demands that Bangla be made the state language of Pakistan. In July 1947, Dr muhammad shahidullah suggested that, after the departure of the British, Bangla could be made the state language of the new state. Shortly after the creation of Pakistan, at the first session of the Pakistan Legislative Assembly on 23 February 1948, dhirendranath datta proposed that Bangla be made one of the languages of the Assembly along with English and urdu. The proposal was rejected.

In March 1948, Governor General mohammed ali jinnah arrived in East Pakistan. On 21 March 1948, at a public meeting in dhaka, he declared that Urdu alone would be the state language of Pakistan. Subsequently khwaja nazimuddin, who had become Prime Minister of Pakistan following the assassination of liaquat ali khan, visited East Pakistan in January 1952. On 27 January, at a public meeting at Paltan Maidan, he reiterated Jinnah's pronouncement that Urdu would be the only state language of Pakistan.

In protest, the Dhaka University National Language Committee called for a token strike on January 30. A meeting was held on the day at Amtala (under a mango tree), on the university campus, where students pledged to carry on the language movement. A decision was also taken to observe a strike in all educational institutions of the province on 4 February. The next day, an all-party meeting was held at the Dhaka Bar Library at which Maulana abdul hamid khan bhasani presided. At the meeting a 40-member All-Party National Language Action Committee was formed. The meeting supported the strike call on February 4.

Accordingly, a strike was observed in all educational institutions on February 4. A student meeting on the day called for a province-wide hartal on 21 February. The government, on its part, invoked Section 144 on 20 February, banning public meetings, rallies and processions. Opposition politicians were unwilling to get involved in a clash with the government just before a general election. The All-Party National Language Action Committee, which met that night, decided by a majority vote not to violate Section 144.

The student community, however, refused to accept this decision. At a meeting on the morning of 21 February on the campus of the arts faculty of the university (now dhaka medical college and hospital), the students unanimously agreed to stick to the earlier decision to defy Section 144. After the meeting, they started gathering on the premises of the Medical College hostel. From there they tried to proceed towards the Provincial Assembly where a session of the East Bengal Legislative Assembly was about to begin. The policemen on duty tried to disperse the students by firing blanks. When this failed, the police fired into the crowd. In the firing abul barkat, a university student, rafiq uddin ahmed, a student of Debendra College, manikganj, and abdul jabbar, a young farmer from gaffargaon, were killed. abdus salam, a bank employee, was injured in the firing and died in hospital later. At least two others are also believed to have been killed in the firing that day.

The reaction to the police killings was immediate. People began to gather on the premises of Dhaka Medical College Hospital. All over the country, schools and colleges held protest meetings, rallies and processions.

To bring the situation under control, the government enforced a curfew and deployed the army in Dhaka. Defying the curfew, on 22 February, students alongside common people came out on city streets to protest the killings. They participated in a gayebi janaza (funeral prayer held without the dead body) on the Medical College campus. On the night of 23 February, the students constructed a shaheed minar (martyrs' memorial) on the spot where the students had been killed. Three days later, the police demolished the memorial.

Nevertheless, the movement for the recognition of Bangla as a state language gained momentum. After the resounding victory of the united front in 1954, Bangla was recognised as one of the state languages of Pakistan at a session of the National Assembly on 9 May 1954.

Till 1971, the day was observed spontaneously, and served as an occasion to revive the feelings of nationalism and Bengali nationhood. After the liberation, the day became a national holiday and the university of dhaka took over the responsibility of the maintenance of the Shaheed Minar and its environs and the responsibility of organising the Shaheed Day. Colourful alpana designs are painted on the ground, and Bangla verses and prose passages about Bangla are written on the walls facing the Shaheed Minar.

At one minute past midnight on 21 February, the President of Bangladesh arrives at the Shaheed Minar to pay homage to the language martyrs. He/she is followed by the Prime Minister, members of the cabinet, staff of diplomatic missions in Dhaka, political leaders, representatives of various institutions and organisations etc. Throughout the day, people of all ages and from all walks of life visit the Shaheed Minar to pay tribute to those who gave their lives for Bangla. Walking slowly, they sing the mournful notes of the elegy, 'Amar bhaiyer rakte rabgano ekushey february ami ki bhulite pari' (Can I forget 21 February reddened with the blood of my brothers?). Apart from this famous song, many poets have written poems on 21 February. In commemoration of the day, bangla academy holds a month-long book fair and organises literary and cultural events throughout the month.

Ekushey February plays an important role in making Bengalis aware of their cultural and national heritage and ultimately and the background to the rise of Bengali nationalism. Since 2000, 21 February is also being observed as the International Mother Language Day. [Ahmed Rafique]