Administration Faridpur Thana, now an upazila, was formed in 1869. 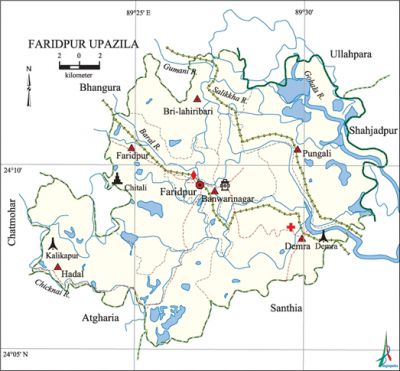 Historical events The saint Shambhu Chand Malla (1789-1872) preached 'Guru Satya' doctrine in the upazila. In 1872, Baju Sarkar and Chhalu Sarkar (two brothers) of village Nagdemra of this upazila led and organized the peasant uprising. On 22 May 1971, the Pak army killed 156 innocent persons at village Hadal of the upazila. They also conducted heavy plundering, set 70 houses on fire and violated women. The Pak army indiscriminately fired on innocent people and killed about 800 of them atvillage Demra on 30 Baishak (Bengali month); they in collaboration with the razakars, also conducted plundering, violation of women and also set mosques, temples, schools, madrasas and settlements on fire. On 4 Bhadra (Bengali month), the Pak army arrested 700 persons of village Gopalpur and killed 26 of them; they also conducted heavy plundering and violation of women. On 27 Ramadan (Hijri month), the Pak army killed 8 innocent persons at village Majat and 3 persons at village Ratanpur of the upazila.

Hats, bazars and fairs Hats and bazars are 15, fairs 3, most noted of which are Banwarinagar Hat and Doljatra Mela of Thakur Shambhu Chand Ashram at Chithulia.

Natural disasters A lot of people lost their life due to the famine of 1770 (1176 BS). The earthquake of 1980 caused cracks on the surface of the earth and silted many a waterfronts. The floods of 1988 and 1998 caused damage to settlements and crops of the upazila.