Savar Upazila (dhaka district) area 280.12 sq km, located in between 23°44' and 24°02' north latitudes and in between 90°11' and 90°22' east longitudes. It is bounded by kaliakair and gazipur sadar upazilas on the north, keraniganj upazila on the south, mohammadpur, adabar, darus salam, shah ali, pallabi and turag thanas on the east, dhamrai and singair upazilas on the west. 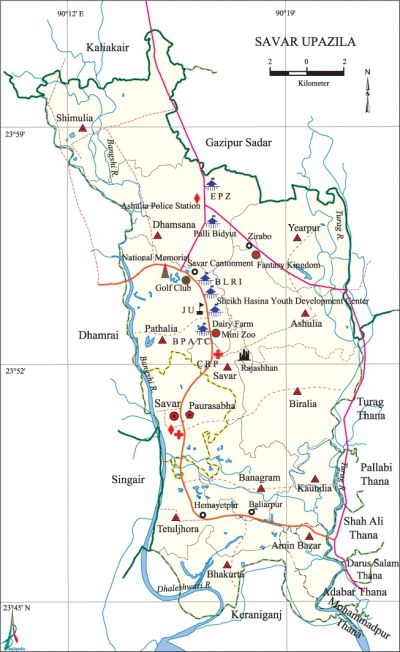 Historical events Savar was the capital of the Sambhoa Kingdom during the seventh and eighth century. Raja Harish Chandra of this kingdom is believed to belong to the Dasbala Buddha family. It is testified by the inscriptions of the sixth century that many foreign traders used to come here for business. During the war of liberation in 1971 freedom fighter Golam Dastagir Titu was killed in a direct encounter with the Pak army, The compatriots buried him near the main gate of the Savar Dairy Farm. Bangladesh army constructed a memorial monument in his honour.