Manoharganj Upazila (comilla district) area 166.50 sq km, located in between 23°04' and 23°12' north latitudes and in between 90°59' and 91°08' east longitudes. It is bounded by laksham upazila on the north, chatkhil and sonaimuri upazilas on the south, nangalkot upazila on the east and shahrasti upazila on the west. 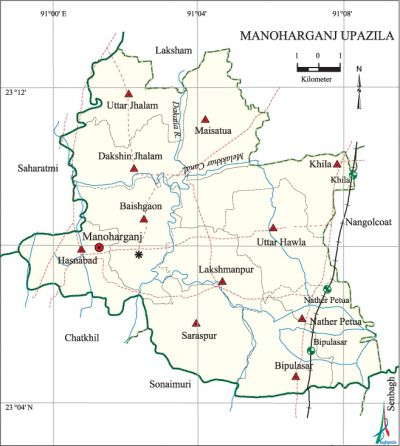 History of the War of Liberation On 13 September 1971, a frontal battle was fought between the freedom fighters and the Pak army at Chaumuhani on the northern side of the Hasnabad Bazar in which 70 Pak soldiers were killed and so was on freedom fighter.

Marks of the War of Liberation Mass grave 1 (Hasnabad).

Hats, bazars and fairs Hats and bazars are 4, fair 1, most noted of which are Mella Bazar, Nadnar Bazar, Lakshmanpur Bazar and Manoharganj Bazar and Baishakhi Mela.

Natural disasters The cyclones of 1941 and 1968 caused heavy damages to settlements, livestock and crops of the upazila.