Naikhongchhari Upazila (bandarban district) area 463.61 sq km, located in between 21°11' and 21°40' north latitudes and in between 92°06' and 92°23' east longitudes. It is bounded by lama upazila on the north, arakan state of Myanmar on the south, alikadam and Arakan state of Myanmar on the east, ukhia, ramu and chakaria upazilas on the west. Busi Tang Hill of the upazila is notable.

Administration Naikhongchhari 'Thana was formed in 1923 and it was turned into an upazila in 1985.

History of the War of Liberation During the war of liberation in 1971 the freedom fighters established temporary camps at Tumkru Para and Sonaichhari Jhumkhola Para of the upazila. The Pak army conducted mass torture; they also set many houses of the upazila on fire. 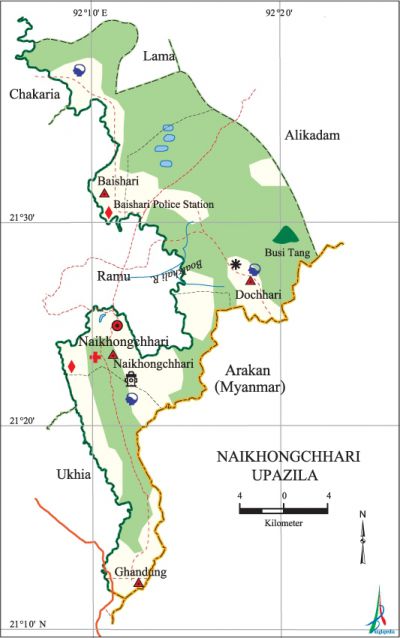 Natural resources Stone and oil mine have been detected in the upazila.