National Awards awards bestowed upon individuals and in some cases to institutions in recognition of meritorious services in various fields in national life. These awards include gallantry awards, Independence Day Award, Ekushey Padak, Bangla Academy Award for Literature, Bangladesh Shishu Academy Award for Literature, National Film Award and National Awards for Games and Sports. In addition, awards are given at the initiative of various institutions and trusts for contribution in the field of literature, science and culture.

Gallantry Awards The freedom fighters were adorned with the insignia of Birsrestha, Bir Uttam, Bir Bikram and Bir Pratik in recognition of their displaying extraordinary valour and highest sacrifice in the war of liberation of Bangladesh. Through a gazette notification of the government issued on 15 December 1973, the insignia of Bir Srestha was conferred upon seven martyr freedom fighters (posthumously), Bir Uttam upon 68, Bir Bikram upon 175, and Bir Pratik upon 426 freedom fighters.

Independence Day Award, also termed Independence Award the highest state award introduced by the Government of Bangladesh in 1977 in memory of the valiant martyrs in the War of Liberation. The award is bestowed upon an individual who is a citizen of Bangladesh in recognition of his substantial contribution to any field or fields in national life.

The criteria of consideration for the award consists of such spheres as memorable contribution to the War of Liberation, contribution to language movement, and contribution in the field of education, literature, science and technology, medical science, journalism, public service, social science, song, games and sports, fine arts and rural development. Besides, provision is there to give the award to an individual or an institution for displaying extraordinary performance in other fields in national life. Each awardee is entitled to a gold medal, a certificate of honour and a sum of cash. The amount of cash reward was originally taka twenty thousand, but was subsequently increased to taka one lac in 2004. The award is traditionally presented on the eve of Independence Day.

Ekushey Padak one of the highest civilian awards in Bangladesh introduced by the government in memory of the martyrs of the Language Movement. This padak was first awarded in 1976. This Padak is awarded to individuals in recognition of their substantial contribution in their respective fields in national life. 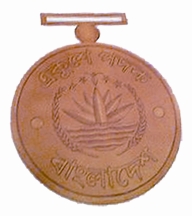 The criteria of consideration for the award consists of contribution in the field of literature, journalism, education, research, economics and poverty alleviation, art and culture, song, dance, fine art, dramatic performance, sculpture, heroes of language movement etc. Each award includes a gold medal of three tolas weight (18 carret standard), and a certificate of honour and a sum of cash. The amount of cash reward was originally taka twenty five thousand, but was subsequently increased to taka forty thousand. The government honoured the four language movement martyrs abul barkat, rafiq uddin ahmed, abdus salam and abdul jabbar with Ekushey Padak (posthumously) in 2000 AD.

Bangla Academy Award for Literature This award is offered to the writers in recognition of their creative genius in consideration of their overall contribution in the field of Bangla language and literature. The award was introduced in 1960 AD. From its very inception till 1984, the awards were scheduled to be offered on six subjects like poetry, novel, short stories, essays, juvenile literature and translation. In 1985, a changed schedule was introduced to offer awards to two writers for their overall contributions in the field of Bangla language and literature. At present awards are given in three distinctive fields: (a) poetry/novel/short story/drama; (b) research/essay/science; (c) translation/ juvenile literature.

The award is normally given every year in the above areas of intellectual activities. In the absence of competent awardee in any of the fields in a particular year, no award is given in that year. The award is scheduled to be given to individuals only, and no institution or group is entitled to it. Every award is valued one lac taka in cash. The awardee is entitled to the cash money, a certificate and a raplica of honour. Besides, the awardee is offered the fellowship of Bangla Academy.

Bangladesh Shishu Academy Award for Literature The Academy adorns one Bangladeshi litterateur with the award for his/her overall contribution in the field of juvenile literature. The award was introduced in 1396 BS (1989 AD). A poet or a litterateur is entitled to this award once during his life time. No provision is made for giving the award posthumously. The awardee is entitled to an amount of taka twenty five thousand in cash, one crest and a certificate of honour.

National Film Award The government offers this award to the individuals for notable contributions to the promotion of the art of cinema, specifically for their best performances, and also to the best films and documentaries. The awardees include the best film, story writer, director, photo editor, composer of dialogue, photo dramatist, actor and actress, side actor and actress, song director, photographer, composer of song, art director, sound man, singer, juvenile artist, dance director, tuner, make-up man, manuscript, dialogue, documentary, short film and special award for juvenile artists. The best director is entitled to taka ten thousand in cash, and the others taka five thousand in cash each. Every awardee gets a raplica in addition to the cash money.

National Sports Award The award is given for specific contributions in the field of games and sports. The awardees include the organisers of games and sports, and the individuals displaying extraordinary performances in football, hockey, cricket, swimming, shooting, chase, and athletics. Each awardee is entitled to a gold medal and taka eight thousand in cash.

National Environment Medal The Directorate of Environment of the government offers this award to the individuals or organizations for extra-ordinary contributions towards the cause of environmental development. The awards are given in four distinctive fields: (a) Preservation of environment; (b) Controlling of environmental polution; (c) Research on environment and discovery of technology; (d) Environmental education and publicity.

The award is normally given every year in the above four distinctive fields. Each of the awardees is entitled to a gold medal of two totals weight (18 carret standard), a certificate of honour and an amount of taka thirty thousand in cash.

Rabindra Award Bangla Academy has introduced Rabindra Award in 2010 for individuals for their special contribution towards the promotion of songs of Rabindranath Tagore. The Award includes taka fifty thousand in cash, a crest and sanad.

Nazrul Award Nazrul Institute has introduced Nazrul Award which is awarded every year to individuals for research on Poet Nazrul Islam and for promoting Nazrul's songs. The Award includes taka fifty thousand in cash, a crest and sanad.