Palashbari Upazila (gaibandha district) area of 190.67 sq km, located in between 25°11' and 25°19' north latitudes and in between 89°16' and 89°32' east longitudes. It is bounded by pirganj (rangpur), sadullapur and gaibandha sadar upazilas on the north, gobindaganj upazila on the south, Gaibandha Sadar and saghatta upazilas on the east, ghoraghat upazila on the west.

Administration Palashbari Thana was formed on 15 March 1937 and it was turned into an upazila in 1983. 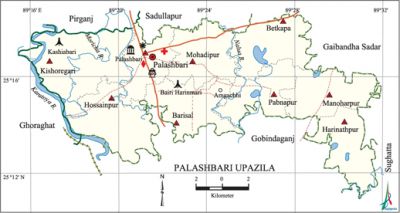 History of the War of Liberation The local people of Palashbari upazila barricaded the Rangpur-Bogra Road consequent upon the historic seventh march address of Bangabandhu sheikh mujibur rahman at the Ramna Race Course. In retaliation, the Pak army opened fire in Palashbari Hat in which one person was killed. Later on the Pak army set many houses of nearby villages on fire. During the war of liberation the Pak army established camp in the divisional office of the Roads and Highways Department, abducted many people to the camp and tortured them to death. Palashbari upazila was liberated on 10 December.