Singra Upazila (natore district) area 528.46 sq km, located in between 24°24' and 24°41' north latitudes and in between 89°03' and 89°20' east longitudes. It is bounded by nandigram upazila on the north, gurudaspur upazila on the south, tarash and sherpur (bogra) upazilas on the east, natore sadar, atrai and raninagar' (Naogaon) upazilas on the west. 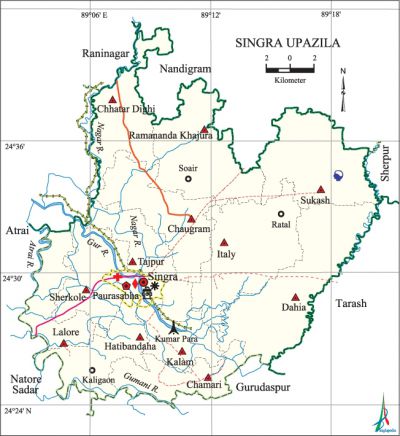 Historical events Since mid seventeenth century Singra area had been under the jurisdiction of Barabkabad 'Sarkar of' Suba Bangla, and the headquarters of the Chaugram Pargana was at Singra. In 1748 this region came under the zamindari of rani bhabani. Natore Circle was formed in 1914 consisting of Natore, baraigram and Singra.

Marks of the War of Liberation Mass grave 1 (Kumar Para).