Sutradhar (Carpenter) is a traditional class principally employed in wood works, especially sawing timber, building houses and boats, making furniture and all kinds of agricultural implements made of wood. The word sutradhar literally means thread-holder. Sutra in sanskrit means thread and dhara means to hold. Sutradhars originally, formed a caste in the Hindu community, whose caste occupation was wood works of all types from ordinary furniture making to shipbuilding.

Sutradhars have been historically known for their ingenuity and artistic tradition. Their artistic work on wood had drawn the attention of even foreigners. The collectors of wood works have always been keen about Bengal wood works, which are now being displayed in many museums of the world. Their wood designs are mostly marked in palanka, door and windows, boats, room-partitions, household furniture, temple walls etc. 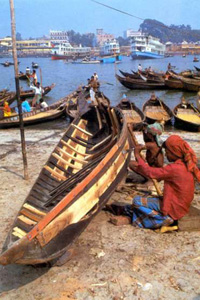 Like many other lower castes, the great majority of Hindu chhutars belong to the Vaishnava sect, but worshippers of Saktis are also found among them. Viswakarma is regarded as their patron deity, and sacrifices are offered to him on the last day of Bhadra and in Magh Panchami.

The social rank of chhutar in the Hindu community is low; brahmans will not take water from their hands. From the late nineteenth century Muslims have adopted the profession to such a large scale that it is now deemed to be totally exempted from its original caste character. Muslim chhutars are popularly called kathmistris.

Labour migration within the country includes huge number of chhutars who in search of livelihood migrate to neighbouring districts. Hilly districts and forest-intensive areas attract them most.

The development of wooden furniture industry has brought radical changes in the life style and nature of work of chhutars. Many chhutars equipped with modern instruments now work under business entrepreneurs in urban wooden furniture industries. Some of them who can really prove their worth are paid handsomely, but most of others who are novices in the trade can hardly survive. [Gofran Faroqi]