Administration Badarganj Thana was formed in 1793 and it was turned into an upazila in 1983. 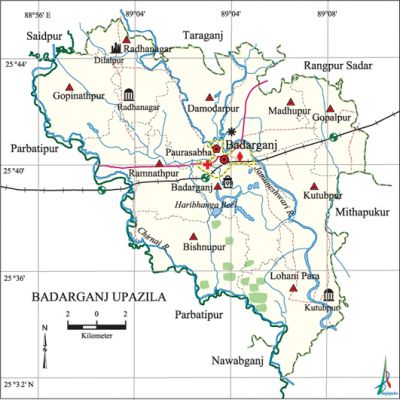 Historical events Badarganj was a part of Barind region during the eleventh century. The king of the Barind area, Mahipal II used to collect taxes mercilessly. As a result the kaibarta (fishermen) community rebelled against the king in 1071. The people of this region took part in anti British fakir-sannyasi resistance and Krishak Praja Bidraha (peasant-tenant rebellion) during 1760 to 1812. The indigo planters of Badarganj constructed a number of Neekhutis including Hariar Kuthi and Chandamari Kuthi. It is known that the peasants of Badarganj participated in indigo resistance movement during 1859-1862. Besides, tebhaga movement in favour of the sharecroppers, was held under Haji mohammad danesh of Dinajpur in which Darajuddin Mandal, Comrade Jiten Datta, Chhayen Uddin participated. During the war of liberation Badarganj was declared a free zone during April 2 to April 14. The freedom fighters destroyed the railway lines to disrupt the movements of the Pak army. On 17 April 1971 the Pak army and their local collaborators conducted mass killings and set on fire the villages like Khalisa Hajipur, Bujruk Hajipur, Ghatabeel and Ramnathpur.

Natural disasters Famine occurred in Badarganj in 1770, 1944 and 1947. Besides, many people died due to epidemics like cholera and small pox. There was heavy casualties occurred due to earth quake in 1897.