Administration Barhatta Thana was formed in 1905 and it was turned into an upazila in 1983. 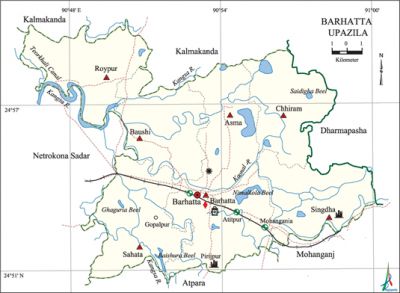 History of the War of Liberation In the beginning of the war of liberation the freedom fighters destroyed the Thakurkona Railway Bridge, located on the western extremity of the upazila, by explosion thereby disrupting the entry of the Pak army. At the end of the War, the freedom fighters attacked the Barhatta police station and the encounter that followed caused a number of civilians dead. Barhatta upazila was liberated on 8 December 1971.

Marks of the War of Liberation In memory of martyr Mukshed Mia the road running from Barhatta to Chandrapur has been named 'Shahid Mukshed Road'.

Hats, bazars and fairs Hats and bazars are 14, fairs 2, most noted of which are Golpur, Baushi, Geria, Naihati, Nischintapur, Monaz bazars and Aushtami Tithi Mela.