Barrage a barrier, fitted with gates, constructed across a river to raise the water level for navigation or diversion of water into canals for irrigation and other uses. A barrage can provide a roadway across a river. Barrages are usually made of concrete and the gates are made of steel. Several forms of gates can be used. The simplest form is a vertical lift gate that, sliding or rolling against guides, can be raised to allow water to flow underneath. Radial or tainted gates are similar in principle but are curved in vertical section better to resist water pressure on the upstream side. Thus a barrage is a device to regulate river flow by suitable operation of its gates. The gates can be opened during high floods to release excess water. 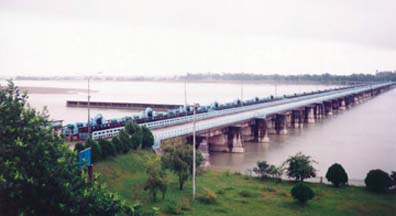 To facilitate diversion of water into canals taking off from the upstream side of a barrage at one or both ends, regulating gates, known as canal head regulators, are constructed at the mouth of these offtake canals. In addition to regulating the supply of water into the canal, the canal head regulator controls the entry of silt and floodwater into the canal. Other ancillary works at a barrage include flood bypass to release unusually high flood discharges, silt control devices for removing sediment deposited in the reservoir and fish passes.

Fish passes usually take the form of fish ladders and fish locks. A fish ladder may consist of a series of stepped pools through which water is continuously discharged during the migratory seasons. The individual pools may be separated by a series of low weirs or linked by short inclined underwater pipes to provide the necessary steps of one to two feet in water levels. Sometimes both weirs and pipes are provided.

Also river training works are required near the barrage site to ensure a smooth and axial flow of water, and thus to prevent the river from outflanking the barrage. River training works may include guide banks, marginal bunds, and spurs or groynes. The guide banks help to channelise the river in the desired course. Marginal bunds are earthen embankments provided on the upstream side in order to protect the adjoining area from submergence due to rise of high flood level caused by obstruction created by the barrage. A portion of the marginal bund is designed as flood bypass, which is allowed to break at times of unusually high floods to release floodwaters without endangering the barrage. Thus flood bypasses act as safety valves. Groynes or spurs are usually earthen embankments constructed transverse to the river flow deflecting the current away from the bank. Thus river banks are protected from erosion due to excessive currents. There are several barrages in Bangladesh. The notable ones are-Tista Barrage, Buri Tista Barrage, Tangon Barrage, Monu Barrage.

Tista Barrage' Located on tista river at Duani in hatibandha upazila in lalmonirhat district. The barrage is a 615m long concrete structure fitted with 44 radial gates having a discharge capacity of 12,750 cumec of water. It is used to divert 280 cumec of water for irrigation through a canal taking off on the right bank. The construction of the barrage started in 1979 and that of the irrigation canals in 1984, and was completed in 1997-98.

The idea of irrigation from the Tista was conceived some time in 1935. A preliminary feasibility report of the project was prepared in 1960 by Haigh Zinn and Associates in collaboration with Associated Consulting Engineers. The consultants proposed a barrage on the river at Goddimari for diverting water into the canals for irrigation. Another report was prepared by Binnie and Partners during 1968-70 with a proposal for the barrage to be sited at Dalia. For about 10 years it remained confined to investigation, studies and survey. In the meantime India constructed a barrage across the Tista at Gazoldoba which is about 100 km upstream of the proposed barrage site in Bangladesh. Engineers of the bangladesh water development board and experts of BUET (bangladesh university of engineering and technology) jointly reviewed the previous reports and prepared a detailed engineering design. A fresh survey and field investigation was also conducted. Finally the actual construction of the barrage commenced in 1979 at Duani, which lies on the left bank. The barrage was completed in August 1990 with a 110m long Canal Head Regulator to control flow of water into the irrigation canal. Also a silt trap to control entry of sediment in the canal, a 610m long flood bypass for release of flood water in excess of the discharge capacity of the barrage, and a 2,470m long closure dam to divert flow through the barrage were constructed. A flood embankment of about 80 km has also been built to provide flood protection to the adjoining areas.

The gross benefited area of the project is 750,000 ha, of which 540,000 ha is irrigable. The project area spreads over seven districts in greater rangpur, dinajpur and bogra. The irrigation canals and water distribution network were developed in two phases. Phase-I has a command area of 182,00 ha with a net irrigable area of 132,000 ha. The remaining area was developed under Phase-II. Irrigation was first provided in 1993. At 1990 prices, the project cost was Tk 8,574 million, making the development cost lowest compared to other irrigation projects in the country. Its cost is about Tk 27,000 per ha as against Tk 111,000 per ha in the Meghna-Dhonagoda Project. The Tista Barrage is the largest irrigation project in the country. It is about four times the size of the ganges-kobadak irrigation project, 12 times that of the Chandpur Project and 40 times that of the Meghna-Dhonagoda Project. In addition to increased agricultural production the project has contributed to fisheries development through its canal system, recreation, and improved communication. The embankments along canals serve as all-weather village roads.

Buri Tista Barrage A 91.5m long barrage constructed on the Buri Tista river for irrigation in the dimla and jaldhaka upazilas of nilphamari district. It is fitted with 14 radial gates having a discharge capacity of 19.82 cumec. The reservoir area at full supply level is about 492 ha. The Buri Tista Irrigation Project was constructed as a pilot project of the Tista Barrage Project. Its construction was started in 1961-62 and completed in 1982-83 at a cost of Tk 5.41 million. Later in the mid-1990s, Tk 31 million was spent for rehabilitation of the project under another project called 'System Rehabilitation Project'. The gross command area of the project is 3,158 ha and the net irrigable area is 2,232 ha.

Tangon Barrage Built on the tangon river, is 35.36m long and is fitted with five radial gates, each measuring 6m x 4.5m, having a total discharge capacity of 25.7 cumec. The pond level in the upstream reservoir is 63.99m above PWD datum. The purpose of the barrage is to supply irrigation water to about 4,450 ha of land in thakurgaon sadar upazila. The construction of the barrage and irrigation canals with ancillary structures was started in 1983 and completed in 1990 at a cost of Tk 125 million with a foreign exchange component of Tk 3.57 million.

Monu Barrage This barrage used to divert water from the Monu river for irrigation of land in the maulvi bazar sadar and rajnagar upazilas of maulvi bazar district. Construction of the barrage and the canals with necessary infrastructure was completed in 1983. Later in 1996 a fish pass was added to facilitate fish movement between the kushiyara river and the Kawadighi Haor area.

Another structure known as the Padma Barrage across the ganges river downstream of the hardinge bridge is now under planning and work on the feasibility study is to commence soon. When completed, a vast area of the southwestern districts of Bangladesh, especially those suffering from lack of irrigation during the dry season, will come under its influence. [M Fazlul Bari]