Belabo Upazila (narsingdi district) area 116.31 sq km, located in between 24°02' and 24°12' north latitudes and in between 90°46' and 90°58' east longitudes. It is bounded by katiadi and kuliarchar upazilas on the north, raipura upazila on the south, Kuliar Char and bhairab upazilas on the east, shibpur and manohardi upazilas on the west. 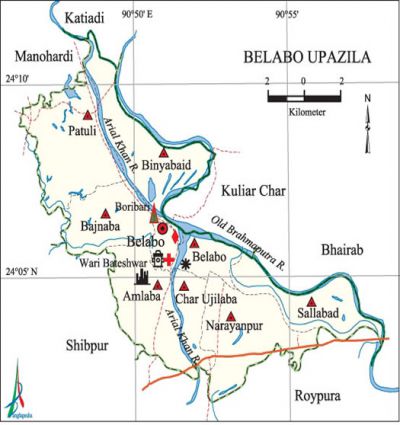 Archaeological heritage and relics Ruins of an ancient mosque and the Mazar of Shah Irani (R) at Habashpur (Sultanate period), high rise chimney of Nilkuthi at village Mahmudabad; many archaeological relics of the pre historic and Maurya period have been discovered in villages Wari and Bateshwar of the upazila.

History of the War of Liberation On 14 July 1971, a battle was fought between the freedom fighters and the Pak army near the upazila sadar in which 5 freedom fighters including Commander Abul Bashar were killed. The Pak army conducted mass killing at village Kaliakandi of Sallabad union. 'The Pak army conducted mass killing, torture and plundering; they also set many houses of the upazila on fire.