Administration Bhaluka Thana was formed in 1917 and it was turned into an upazila in 1983. ' 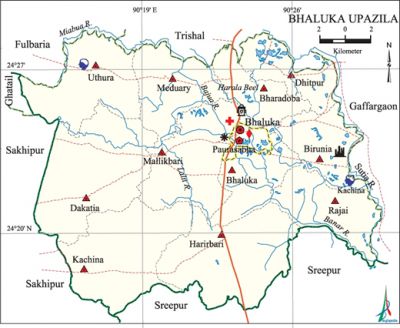 Historical events During the reign of Pala and Sena dynasty, Mymenshing and Bhaluka region was under the administration of Samanta ruler. This region came under the Muslim rule during the reign of Alauddin Hossain Shah in the fourteenth century. During the British period Mymenshing region was divided into a number of sub divisions. Bhaluka Thana, now an upazila, was included into Mymenshing sadar subdivision. During the war of liberation Afsar Uddin Ahmed, Sub Sector Commander of Sector 11, locally trained the freedom fighters and collected arms and ammunitions to challenge the Pak army. The Pak army established military camps at Mallikbari, Ashka, Tamat, and Bhaluka. They conducted mass killing, torture and plundering in the upazila; the Pak army also set many houses of the upazila on fire.