Bhuapur Upazila (tangail district) area 216.38 sq km, located in between 24°23' and 24'°35' north latitudes and in between 89°44' and 89°54' east longitudes. It is bounded by gopalpur and sarishabari upazilas on the north, kalihati upazilas on the south, Kalihati, ghatail and Gopalpur upazilas on the east, Jamuna river and sirajganj sadar upazila on the west.

Administration Bhuapur Thana was formed in 1974 and it was turned into an upazila on 24 March 1983. 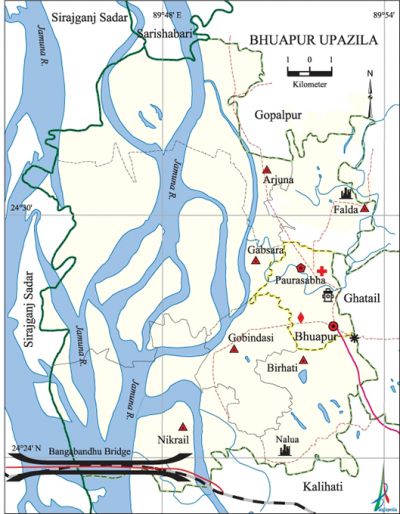 History of the War of Liberation The Sarba Daliya Sangram Parishad (the all party resistance council) hoisted the flag of the Bangladesh in a meeting held on 28 March 1971 on the foot of the Bhuapur College Shahid Minar. On 11 August the freedom fighters challenged a Pakistani ship carrying huge amount of arms and ammunitions at Sirajkandi and captured it. The freedom fighters later burnt the ship. On 8 November an encounter was held between the freedom fighters and the Pak army in Bhuapur. On 17 November the Pak army brutally killed 32 innocent persons at village Chhabisha of this upazila; they also set 350 houses on fire.