Char Fasson Upazila (bhola district) area 1440.04 sq km, located in between 21°54' and 22°16' north latitudes and in between 90°34' and 90°50' east longitudes. It is bounded by lalmohan upazila on the north, bay of bengal on the south, manpura upazila, Shahbazpur Channel and Bay of Bengal on the east, dashmina and galachipa upazilas on the west. There are more than 100 chars in the upazila, most noted of which are Char Kukri Mukri, Dhalchar, Char Manika, Char Aicha, Char Nizam, Char Newton.

Administration Char Fasson Thana, now an upazila, was formed in 1970. 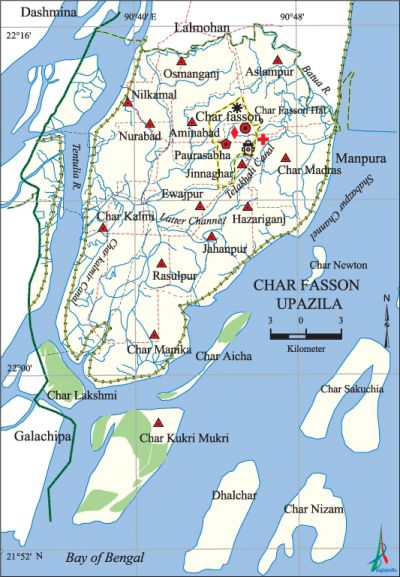 History of the War of Liberation During the war of liberation in 1971, an encounter was held between the freedom fighters and the Pak army at a place in between Aminabad and Osmanganj in which 11 freedom fighters were killed or wounded.

Natural disasters Thousands of people of the upazila were killed in a devastating tidal bore in 1970.