Chatkhil Upazila (noakhali district) area 133.89 sq km, located in between 22°58' and 23°08' north latitudes and in between 90°53' and 91°02' east longitudes. It is bounded by ramganj, shahrasti and manoharganj upazilas on the north, lakshmipur sadar upazila on the south, sonaimuri upazila on the east, Ramganj and Lakshmipur Sadar upazilas on the west.

Administration Chatkhil Thana was formed in 1977 and it was turned into an upazila in 1983. 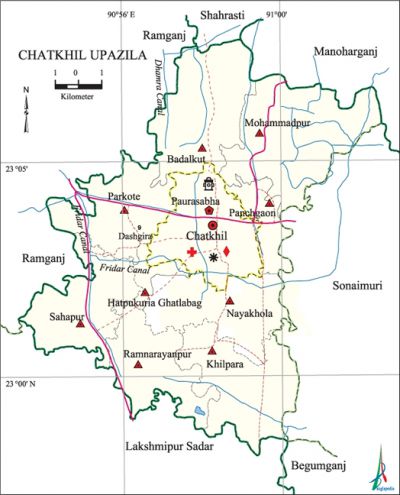 Hats, bazars and fairs Hats and bazars are 22, fairs 2, most noted of which are Chatkhil, Panchgaon, Dashgharia and Khilpara bazars and Chaitra Sankranti Mela.'

Natural resources Natural gas has been discovered in the Saptagaon area of Badalkut union.

Sources of drinking water Tube-well 88.41%, tap 2.95%, pond 3.07% and others 5.58%. The presence of intolerable level of arsenic has been detected in shallow tube-well water of this upazila.

Natural disasters The floods of 1988, 1998 and the cyclone of 2004 caused heavy damages to settlements livestock and crops of the upazila.