Chhagalnaiya Upazila (feni district) area 106.99 sq km, located in between 22°54' and 23°07' north latitudes and in between 91°26' and 91°35' east longitudes. It is bounded by phulgazi upazila on the north, mirsharai and feni sadar upazilas on the south, Indian State of Tripura on the east, Feni Sadar upazila on the west.

Administration Chhagalnaiya Thana was formed in 1879 and it was turned into an upazila on 1 October 1983. 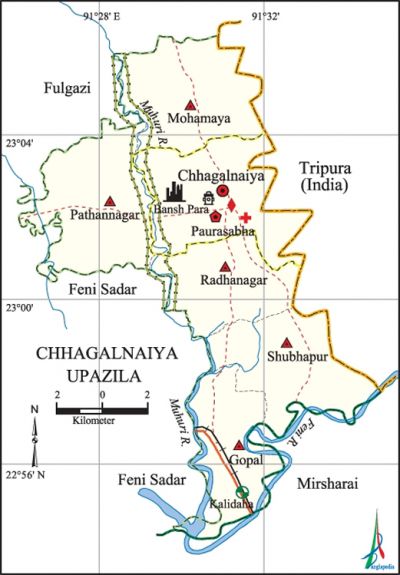 Hats, bazars and fairs Hats and bazars are 28, fairs 3, most noted of which are Koroiya, Daroga, Mirzar, Jamaddar, Bangla and Pathannagar bazars and Amjad Majumdar Hat; Adhar Manik and Kaligachtola Mela.

Natural disasters A huge number of people of the upazila lost their life in the famine of 1943. The cyclone of 1963 and the tornado of 1980 caused heavy loss of life and damages to settlements, livestock and other properties of the upazila.