Mirsharai Upazila (chittagong district) area 482.88 sq km, located in between 22°39' and 22°59' north latitudes and in between 91°27' and 91°39' east longitudes. It is bounded by tripura state of India, chhagalnaiya and feni sadar upazilas on the north, sitakunda upazila and bay of bengal on the south, fatikchhari upazila on the east, sonagazi and companiganj (noakhali) upazilas on the west.

Administration Mirsharai Thana was formed in 1901 and it was turned into an upazila in 1983. 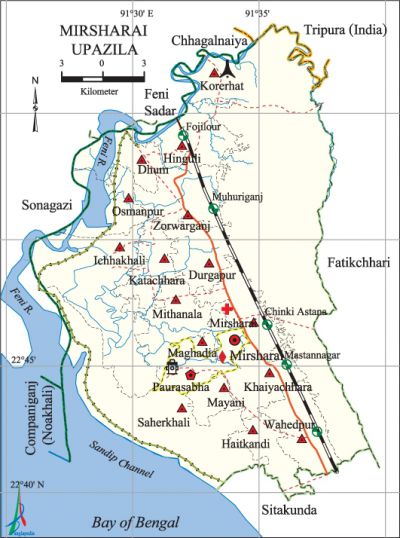 Historical events Sultan Fakhruddin Mobarak Shah conquered Chittagong in 1340 AD and established the Muslim rule in this region. During the reign of Gaur Sultans Hussain Shah and Nusrat Shah, Paragal Khan and Chhuti Khan were the rulers of this area. Subsequently Nizam Shah, brother of emperor Sher Shah, was the ruler of this area. Nizampur Pargana is named after Nizam Shah and the whole area of Mirsharai came under the control of Nizampur pargana. From the beginning of the 16th century this region was very rich in Bangla literature. Most of the time between 1580 and 1666 this region was under the control of the Arakanese. The place at which (of the present Mirsharai thana) Bujurg Umed Khan, son of Subadar Sayesta Khan, landed after crossing the Feni River was named as Bujurg Umedpur. With the conquest of Chittagong by Bujurg Umed Khan in 1666, this region came permanently under the Mughal rule. Towards the end of British rule in India, Durgapur and Karerhat areas of Mirsharai upazila were the centres of revolutionary activities of Chittagong. A fierce battle was fought between the freedom fighters (under Capt. Wali Ahmed) and the Pak army at a place adjacent to the Fenafuni Bridge on the south of Mirsharai sadar in which about 100 Pak soldiers were killed. Besides, direct encounters were held between the freedom fighters and the Pak army at many' places including Shuvapur Bridge, Hinguli Bridge, Aochi Mia Bridge and Mostan Nagar.