Feni Sadar Upazila (feni district) area 197.33 sq km, located in between 22°54' and 23°04' north latitudes and in between 91°18' and 91°31' east longitudes. It is bounded by tripura state of India, chauddagram, PHulgazi and chhagalnaiya upazilas on the north, sonagazi and mirsharai upazilas on the south, Chhagalnaiya upazila on the east and daganbhuiyan upazila on the west. 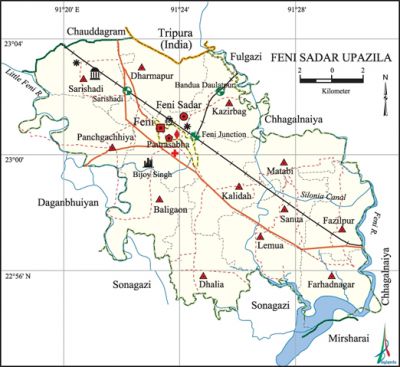 Historical events The Naib Nazim of Dhaka appointed Muhammad Ali Chowdhury as the Fouzdar of Feni in 1762. Muhammad Ali Chowdhury revolted against the British; as a result he lost his zamindari in 1790. During the war of liberation in 1971, the Pak army took control over Feni sadar upazila on 23 April. They conducted genocide, torture and violation of women; they also set many houses of the upazila on fire.

Natural disasters The devastating cyclone and tidal bore of 1876 caused huge loss of life and damages to settlements, livestock and other properties of the upazila.