Dance Drama combines dance, drama, music and song. Early drama was similar to dance drama, combining narrative, song and dance, but modern Babgali dance drama is predominantly the achievement of rabindranath tagore. His dance dramas, such as Chandalika, Shyama, Chitrabgada, use dances set to beautiful songs to convey Tagore’s humanism. uday shankar modernised the Tagore tradition towards the middle of the twentieth century. Tagore’s dance drama is essentially based on songs, while Uday Shankar’s dance drama is dominated by background music. Uday Shankar became famous by adapting Tagore’s poems Samanya Ksati(A Small Loss) and Abhisar (The Tryst) into dance drama in 1961 on the occasion of the Tagore birth centenary in Kolkata. Among Uday Shankar’s other well-known dance dramas are Kalpana (Imagination) and Labour and Machine.

Up to the Partition of the subcontinent in 1947, Bangali dance drama was influenced by the Tagore tradition and Uday Shankar’s modern techniques. The creation of Pakistan did not eliminate the influence of Tagore, though the attempt to portray a 'Pakistani’ culture led to the creation of dance dramas such as Shashi Pannu, based on a love story from West Pakistan, Omar Khaiyam, based on the life of the famous persian poet, and Anarkali, based on the story of Prince Salim and Anarkali. The growing Bangladeshi nationalism of the sixties, however, soon started to make its impact on dance drama, with themes being drawn from social and political issues.

The first dance drama staged in East Pakistan was Ravishankar Chatterjee’s Indrasabha (Court of Indra) at Rupmahal cinema hall in dhaka in 1948. In 1952 bulbul chowdhury, who had already made a name as a dancer in pre-partition India, staged Yena Bhule Na Yai (Lest We Forget) based on the famine of 1943. This was followed by two other dance dramas reflecting the 'Pakistani’ theme: Hafizer Swapna(Dream of Hafiz) and Iraner Panthashala (At an Iranian Tavern).

bulbul lalitakala academy was established in Dhaka in 1955 to commemorate Bulbul Chowdhury’s name and continue his work. It was at the initiative of this academy that Naksi Kanthar Math (The Field of the Embroidered Quilt) by jasimuddin was adapted as a dance drama and staged in 1958 under the direction of gazi alimuddin mannan. This tragic love story of the village boy Rupa and the village girl Saju reflected the growing interest in the regional Bangali culture, different from the imposed 'Pakistani’ identity. The sense of a different Bangali identity led to a reawakened interest in Tagore, an interest that was furthered by the celebration of his birth centenary in 1961.

Different cultural organisations, including Bulbul Lalitakala Academy and chhayanaut, staged his dance dramas, among them Syama, with Atiqul Islam directing the music, and Mandira Nandi directing the dance. This was followed by Chitrangada, Mayar Khela, Chandalika, Shapmochan, Bhanusingher Padavali and Taser Desh. Despite the antipathy of the Pakistani authorities towards Tagore, his dance dramas continued to be staged both in Dhaka as well as in smaller towns. In 1967 Taser Des was staged at bharateswari homes in mirzapur under the direction of Amanul Huq.

[[Image:DanceDramaAnarcoli.jpg|thumb|400px|Bulbal and Afroza Chowdhury in Anarkali Following the tradition of Tagore’s dance drama, Enamul Huq created Hazar Tarer Vina(The Thousand-Stringed Vina) based on the life of kazi nazrul islam. It was produced by Bulbul Academy, with Baburam Singh and Kajal Mahmud directing the dance and altaf mahmud directing its music. In the sixties, many dance dramas were based on folk songs and tales, such as Mahuya, Sonaimadhav, Maluya, Nader Chand and Chandravati, created by Peejush Kiron Pal, Jogesh Das, GA Mannan and Nikunja Bihari Pal respectively. Ajit Sanyal, who taught at Bulbul Academy, staged Shyamal Matir Dharatale (On the Green Plains), a dance drama based on the life of the ordinary people of Bangladesh. gauhar jamil, who had started jago art centre, staged Tagore’s dance drama Samanya Ksati as well as Kavchanmala, based on a folk tale. At the same time, the Pakistani theme was reflected in Alpana Mumtaz’s Shashi Pannuand Omar Khaiyam.

Quite a few dance dramas were staged outside Dhaka many of which were based on local folk tales. Among them are Rupasi Gan (The Beautiful Village, 1960) and Padmar Dheu (The Waves of the padma, 1964), by the lyricist Muhammad Mohsin Reza, which were both staged at rajshahi, with Bazlur Rahman Badal choreographing the dance and Abdul Aziz Bachchu directing the music. In chittagong Runu Biswas staged Amina Sundari, Bheluya Sundari and Maleka Banu. Other dance dramas based on folk tales included Rupvan, Gunai Bibi, Beder Meye. Local writers and poets also wrote dance dramas such as Badal Barisane (When It Rains), Kaveri Tire (On the Banks of the Kaveri), Musafir and Julfikar (based on the life of Kazi Nazrul Islam). Dance dramas by Tagore were also staged outside Dhaka, among them Chandalika, Syama, Sapmochan, Chitrangada and Mayar Khela. Dance dramas were also staged on a variety of issues, such as Mansingh and Virabgana Sakhina, based on the story of Isa Khan, directed by Altamas Ahmed, Sona Jhara Sandhya (An Enchanting Evening), a love story directed by Amanul Huq, and Shatabdir Svapna (The Dream of the Century), Sur Pelo Surabhi (Surabhi Finds a Tune) and Jhavjha (Hurricane) created by AKM Mujtaba.

Political concerns have played a prominent role in the literary and cultural fields of Bangladesh, including dance drama. Though the Pakistani spirit continued to influence the drama of the '60s, with GA Mannan staging Kashmir in 1965 against the backdrop of the Indo-Pakistan war, the subsequent period saw the beginning of a nationalist awakening that finally culminated in the war of liberation. Dance dramas started reflecting the political and economic concerns of the people with themes either going back to the language movement of 1952 or drawing upon the current mass movement against the autocratic Pakistani regime. At the same time other social and political concerns found their way into dance drama: exploitation, imperialism, colonialism, landlordism, hoarding. Among these dance dramas are Rajpath Janapath (Highways and Lanes) and Uttaraner Deshe (The Victorious Country), written by Enamul Huq and directed by Rahija Khanam Jhunu and Baburam Singh; Pratirodhe Bahniman (The Fiery Resistance) directed by Habibul Choudhury; and Jvalchhe Agun Ksete Khamare (Cropfields on Fire), Hartal (Strike), Ora Kaj Kare (They Work) and Digante Natun Surya (New Sun on the Horizon), written and directed by Amanul Huq. 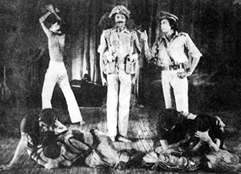 A scene from Battle of Bangladesh

After the liberation, dance artistes created a host of new genres of dance dramas in which, for obvious reasons, the theme of liberation figured prominently. The first dance drama inspired by the theme of liberation, Bangladesher Muktiyuddha (The Liberation War of Bangladesh), staged at a cultural function organised in Dhaka to mark the award of the Joliot-Curie Peace Prize to bangabandhu sheikh mujibur rahman, was directed by Amanul Huq. A little later, another dance drama, Nabarun, on the same theme, was staged under the joint direction of GA Mannan, Gauhar Jamil and Altamas Ahmed. Biksubdha Satai June (Turbulent 7th June), written by Mustafa Sarwar, on the theme of the 6-point movement, was staged under the direction of Amanul Huq.

In 1974, the dance drama, Dhansindi Nadi Tire (On the Banks of the Dhansindi), was staged at the Engineers’ Institution in Dhaka under the direction of Mahfuzur Rahman. The theme of liberation continued to inspire dance dramas through the 80s with Battle of Bangladesh, Amar Svadesh Amar Bhalabasa (My Country, My Love), written and directed by Amanul Huq; Bijay Pataka (The Flag of Victory) directed by Laila Hasan; Svadhinatar Svapakse (On the Side of Independence) written by Akram Ali and directed by Kamal Sarkar; Mayer Mukti (Mother’s Freedom) directed by Raushan Jamil; and Suryamukhi Nadi (The Suryamukhi River) written by Enamul Huq and directed by Rahija Khanam Jhunu. At the same time, dance dramas have also been performed on a variety of themes. In 1995, Shakuntala was staged at the initiative of Kingshuk Sangeet Academy of jessore, and Chira Amlan (Forever Fresh) and Mayer Chokhe Purnima (The Full Moon through Mother’s Eyes), written by Shahidul Islam, were produced by the bangladesh shilpakala academy under the direction of Shamim Ara Nipa and Shibli Mohammad.

Many dance dramas have also been presented on Bangladesh Television. These include Nazrul Islam’s Kajari, Tagore’s Shahajahaner Svapna (Shahajahan’s Dream), Jasimuddin’s Madhumalati. Other dance dramas include Surya Toran (The Sun Gate) and Arunachaler Pathe (Towards the Land of the Sun), Satti Tarar Desh (In the Lands of the Seven Stars) symbolising the seven SAARC countries, Alibaba O Challish Chor (Alibaba and the Forty Thieves), Banshariya (The Flute Player) and Kisanir Svapna (The Dream of an Adolescent Girl). Dance dramas often reflect the people’s concerns. Thus Megh Raja Megh De (O Cloud King, Give Us Rain) was inspired by the occasional seasons of severe drought; Amar Priyake Niyechhe Kede (My Beloved Was Snatched Away) was inspired by the tidal surges that often accompany cyclones; Man Besatir Hate (In the Market of Hearts), reflected lives and loves in a rural setting; the theme of the liberation war inspired Ora E Matir Santan (They Are Sons of This Soil). Apart from GA Mannan, Rahija Khanam Jhunu, and Amanul Huq, Barkatullah, Golam Mostafa Khan, Zeenat Barkatullah, and Mostafa Manwar have also directed dance dramas. [Amanul Huq]