A figurine of a dancing girl was discovered at Mohevjodaro. Excavations elsewhere have unearthed clay dolls, very similar to the mother goddess figures that village women form even today with a soft lump of clay. Dolls have also been unearthed at savar, mainamati, mahasthan and dinajpur in Bangladesh. Apart from human figures, animal and bird forms have also been discovered at these sites. 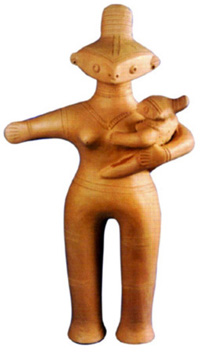 Clay dolls perhaps emerged from the potter's work of making images of gods and goddesses. These may be shaped by hand or made in moulds. It is easier and quicker to mould dolls. Ornamentation and costumes are drawn by means of pointed sticks. Handmade dolls are not painted, but dried in the sun and fired in kilns.

Moulds for making dolls are generally handed down, though new designs of moulds are also made. Dolls made in moulds are painted in various colours after they are fired. Common colours are white, blue, yellow, green, and black. mymensingh is famous for doll-making as are savar, dhamrai and Rayerbazar.

Wooden dolls are also traditional and are usually made from kadam, amda, shyaoda, and shimul. Artisans shape the wood into triangular and semi-circular pieces to make the figures of women. The bodies of the dolls are painted as well as their dresses and ornaments. Colours commonly used are yellow, red, green and black. These female dolls are called 'mummy dolls' since they look like Egyptian mummies. 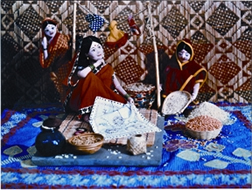 Dolls made of cloth

Kandipara village in brahmanbaria used to be famous for its puppets and puppet-shows. Formerly, the artisans were Hindu, but Muslims have also started making puppets. Puppets are commonly made of clay and wood. The faces of the puppets are painted. They are given hair made of jute or artificial synthetic fibres. They are then dressed in colourful garments.

Shola dolls are made in the faridpur and rajshahi regions, and at Shankhari Bazar in dhaka. The craftsmen cut shola into pieces and make different types of dolls by pasting the cut strips together. Normally, such dolls are sold at village fairs. 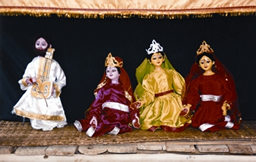 The cloth dolls of today differ from the rag dolls of the past. These are sophisticated dolls, mainly influenced by the Japanese doll, and are made as decoration pieces rather than as children’s playthings. BSCIC offers training in doll making. Authentic in features and costumes, these dolls display the rich variety of Bangladeshi costumes and occupations. Common dolls of this type include brides and bridegrooms, gypsies, manipuri dancers, etc.

Small angel dolls made of jute have become popular, primarily as Christmas trees ornaments. Moulded dolls are also made of papier mache or china clay. Metal dolls and images of different gods and goddesses are also made at Lalbagh in Dhaka, Dhamrai, and Savar. Although Hindus were traditionally engaged in this handicraft, recently Muslims have also joined the trade. [Zinat Mahrukh Banu]