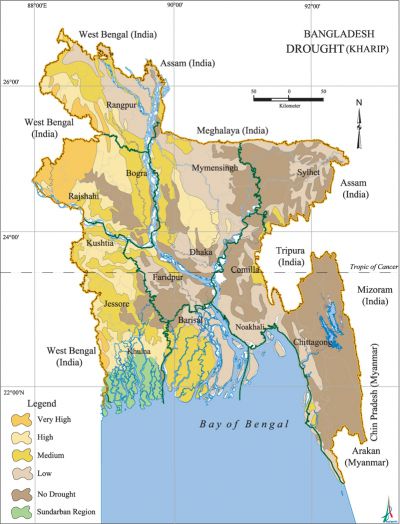 Drought a prolonged, continuous period of dry weather along with abnormal insufficient rainfall. It occurs when evaporation and transpiration exceed the amount of precipitation for a reasonable period. Drought causes the earth to parch and a considerable hydrologic (water) imbalance resulting water shortages, wells to dry, depletion of groundwater and soil moisture, stream flow reduction, crops to wither leading to crop failure and scarcity in fodder for livestock. Drought is a major natural hazard faced by communities directly dependent on rainfall for drinking water, crop production, and rearing of animals. Since ancient times droughts have far-reaching effects on mankind. Large land areas often suffer damages from dust storms and fire. Drought could be the reason for migration of early human communities. It has long been considered to be a natural hazard responsible for ups and downs of many civilisations of the world. The worst drought of the last century in the sub-continent occurred in 12 states of India in 1999-2000.

In Bangladesh drought is defined as the period when moisture content of soil is less than the required amount for satisfactory crop-growth during the normal crop-growing season. Droughts are common in the northwestern districts of Bangladesh. Some of these droughts usher in famine. One definite manifestation of the onset of the drought is the 'top burning' of the bamboo and betel nut trees, that is, they loose green foliage and the fresh leaves turn brown because of lack of moisture in soil and air. The condition often culminates to their death, if there is no rain or irrigated water for a substantially long time. However, drought can also occur in areas that usually enjoy adequate rainfall and moisture levels. Due to drought severity, crop loss ranges between 20 and 60 percent or even may be more for transplanted aman and other rice varieties. Depending on the intensity of drought, the estimated yield reduction of different crops varies from 10% to 70%. The yield loss may considerably be reduced through judicious and limited irrigation at the critical stages of crop growth. 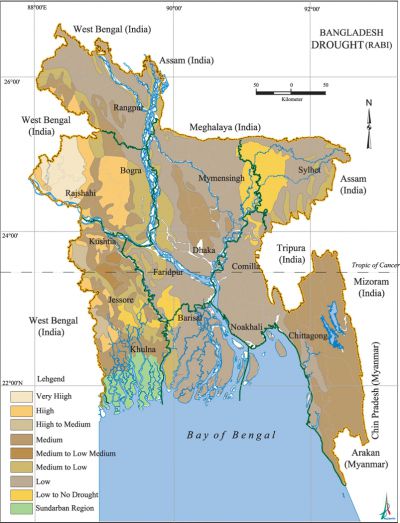 Drought has become a recurrent natural phenomenon of northwestern Bangladesh (ie barind tract) in recent decades. Barind Tract covers most parts of the greater Dinajpur, Rangpur, Pabna, Rajshahi, Bogra, Joypurhat and Naogaon districts of Rajshahi division. Rainfall is comparatively less in Barind Tract than the other parts of the country. The average rainfall is about 1,971 mm, which mainly occurs during the monsoon. Rainfall varies aerially as wells as yearly. For instance, rainfall recorded in 1981 was about 1,738 mm, but in 1992 it was 798 mm. The distribution of rainfall is rather variable from one place to another. Thus this region has already been known as drought prone area of the country.

The average highest temperature of the Barind region ranges from 35'C to 25'C for the hottest season and 12'C to 15'C for the coolest season. Generally this particular region of the country is rather hot and considered as a semi-arid region. In summer, some hottest days experience the temperature of about 45'C or even more in the Rajshahi area, particularly at Lalpur. Again in the winter the temperature even falls at 5'C in some places of Dinajpur and Rangpur districts. So this older alluvium region experiences the two extremities that clearly contrast with the climatic condition of the rest of the country.

Chronology of droughts of historical significance

1791 Drought affected Jessore district. Prices had risen to twice and three times of their usual levels.

1866 Severe drought in Bogra. The rice production of the district was hit hard and the price went up three times its normal level.

1872 Drought in Sundarbans. The rainfall was deficient and in several lots the crops suffered to a great extent.

1874 Bogra was affected and the crop failure was much greater. The rainfall was extremely low.

1973 One of the severest in the present century and was responsible for the 1974 famine in northern Bangladesh.

1975 This drought affected 47% of the entire country and caused sufferings to about 53% of the total population.

1978-79 Severe drought causing widespread damage to crops. Reduced rice production by about 2 million tons and directly affected about 42% of the cultivated land and 44% of the population. It was one of the severest in recent times.

1989 Most of the rivers in NW Bangladesh dried up and several districts, such as Naogaon, Nawabganj, Nilpahamari and Thakurgaon; dust syndrome occurred for a prolonged period due to drying up the topsoil.

1994-95 This drought was followed by that of 1995-96, caused immense damage to crops, especially in the case of rice and jute the main crops of NW Bangladesh. These are followed by bamboo-clumps, a major cash earning crop of many farmers in the region. In the recent times, this was most persistent drought in Bangladesh.

Causes The hydrological and climatic conditions of Bangladesh are characterised by too much water in the wet monsoon and too little in the dry months. The drought environment is further aggravated by the cross boundary anthropogenic interventions. About 58 rivers that flow through Bangladesh actually come through India and Myanmar (India 55 and Myanmar 3). Most of these trans-boundary rivers enter into the country along the NW and SW regions.

The natural flow of these rivers is interrupted by upstream withdrawal of water for economic and household uses as well as for construction of water management structures by the concerns countries. The effect on these structures obstructs the normal flow of water in rivers such as the ganges (at Farakka), the punarbhaba (just beyond Banglabandha) and the tista. These structures mostly divert dry season flow of the rivers, which create not only a scarcity of surface water in NW and SW Bangladesh, but also tend to affect negatively the recharge of groundwater in these regions. Ultimately it leads to moisture loss in a vast area and contributes to drought condition in these two regions of the country. [Sifatul Quader Chowdhury]