Gowainghat Upazila (sylhet district) area 486.10 sq km, located in between 24°55' and 25°11' north latitudes and in between 91°45' and 92°07' east longitudes. It is bounded by Meghalaya state of India on the north, sylhet sadar and jaintiapur upazilas on the south, Jaintiapur upazila on the east, companiganj upazila on the west. Jafflong is an important tourist spot. Tamabil land port is used for importing coal and other goods from India.

Administration Gawainghat Thana was formed in 1908 and it was turned into an upazila in 1983. 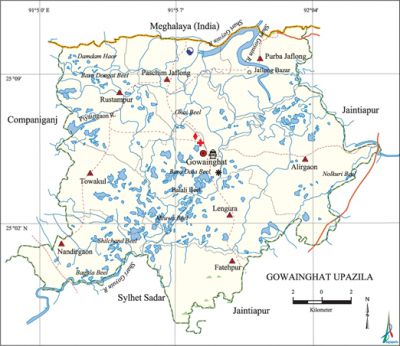 History of the War of Liberation On 28 November 1971, the Pak army launched a surprise night attack at village Ujuhat of Alirgaon Union and killed 25 freedom fighters.

Hats, bazars and fairs Hats and bazars are 19, most noted of which are Gowainghat, Radhanagar, Jaflong, Ballaghat, Hadarpar and Salutikar hats.