Ishwardi Upazila (pabna district) area 246.90 sq km, located in between 24°03' and 24°15' north latitudes and in between 89°00' and 89°11' east longitudes. It is bounded by lalpur and baraigram upazilas on the north, kushtia sadar and mirpur (kushtia) upazilas and the ganges river on the south, pabna sadar and atgharia upazilas on the east, bheramara upazila and Ganges river on the west.

Administration Ishwardi Thana was formed in 1949 and it was turned into an upazila in 1983.

Historical events On 29 March 1971, the Pak army killed five young men at village Madhabpur. An encounter between the freedom fighters and the Pak army was held at village Joynagar. On 14 December the Indian air forces bombarded on the Hardinge Bridge in which span No. 12 was broken and spans 9 and 15 were partially damaged. 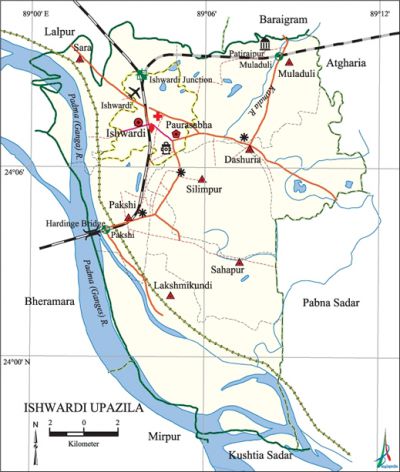