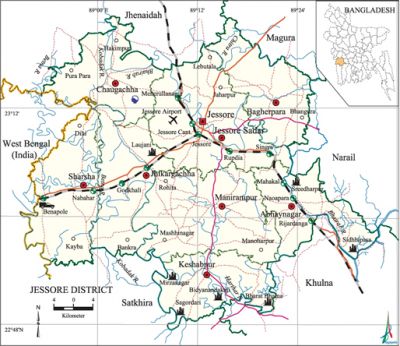 Administration Jessore district was formed in 1781. Of the eight upazilas of the district manirampur is the largest (444.72 sq km) and abhaynagar is the smallest (247.19 sq km).

Folk culture Folk songs such as Jari, Dheuo, Bhab, Baul, Foloi are sung in the rural areas of the district. Besides, indigenous communities like Bede, Pode, Kaora, Bagdi and Buno perform various folk festivals during Puja (worship) and marriage ceremony.