Jhalokati Sadar Upazila (jhalokati district) area 204.48 sq km, located in between 21°35' and 22°47' north latitudes and in between 90°06' and 90°17' east longitudes. It is bounded by banaripara, wazirpur and babuganj upazilas on the north, rajapur upazila on the south, barisal sadar and nalchity upazilas on the east, kawkhali (pirojpur R), Nesarabad and Banaripara upazilas on the west. 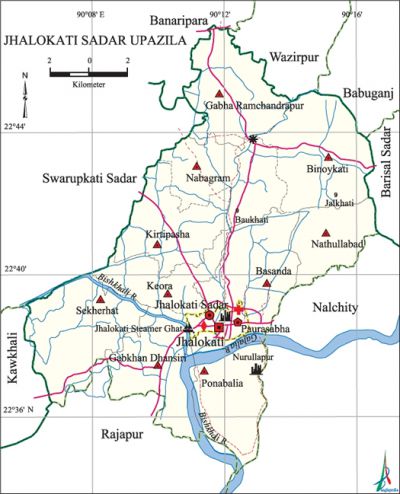 History of the War of Liberation Having entered into Jhalokati sadar on 27 April 1971, the Pak army started indiscriminate killing, plundering, raping' in diferrent places; they also set many houses on fire. On 5 May encounters were held between the Sarvahara Party of Siraj Sikder and the Pak army at Madra, Vhimrul and Peara Bagan in which 21 Pak soldiers including the razakars were killed. The Pak army killed 23 pious Muslims on 23 May at Ramanathpur Sharif Bari while they were on prayer. On 13 November, 18 Pak soldiers including 2nd Lt. Ajmat were killed in an encounter with the freedom fighters at Chachair and Premdaha. The Pak army was forced to leave Jhalokati on 8 December.

Hats, bazars and fairs Hats and bazars are 21, fairs 7, most noted of which are Baukati Hat, Jhalokati Hat, Gabkhan Hat.

Sources of drinking water Tube-well 92.93%, tap 2.35%, pond 3.13% and others 1.59%. The presence of intolerable level of arsenic has been detected in shallow tube-well water of the upazila.