Kaliganj Upazila (lalmonirhat district) area 236.96 sq km, located in between 25°54' and 26°04' north latitudes and in between 89°07' and 89°22' east longitudes. It is bounded by hatibandha upazila and west bengal of India on the north, gangachara and aditmari upazilas on the south, Aditmari upazila on the east, kishoreganj (nilphamari) and jaldhaka upazilas on the west.

Administration Kaliganj Thana, now an upazila, was formed in 1913.

Historical events Main historical events of the upazila include Mughal invasion of Kuchbihar in 1687; peasant rebellion led by Nuraldin, Fakir-Sannyasi Resistance and the peasant movement in the 1940. During the war of liberation in 1971 Kaliganj upazila was under Sector 6. On 6 April, the Pak army launched a surprise attack on Kaliganj and brutally killed a number of people. The Pak army was forced to leave Kaliganj in the face of heavy attack of the freedom fighters launched on 5 and 6 December. Kaliganj was liberated on 6 December. 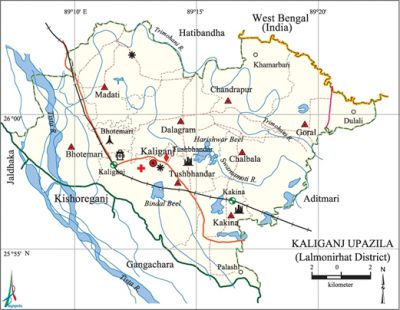 Marks of the War of Liberation Mass grave 1 (at a place adjacent to the KUP Degree College); Mass killing site (to the east of Bhotemari Railway Station); memorial monument 1 ('Chiranjibi Kaliganj' at the compound of Kaliganj KUP High School).

Natural resources Stone with high quality silicate and manganese have been discovered in this upazila.